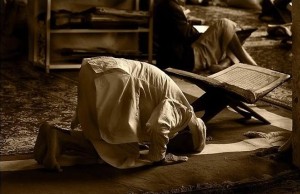 If the person praying leaves an obligation from the obligations of the prayer deliberately, then his prayer is nullified.

In the first part, we have reviewed some rulings of the Prostration of Forgetfulness including the ruling of a person adds an extra standing, sitting, bowing or prostration.

If a person omits a Pillar (Rukn) from his prayer, then if it is in the initial takbir (takbirat Al-Ihram), then there is no prayer for him whether he left it deliberately or forgetfully because his prayer has not been established. If it is something other than the initial takbir, then if it is left deliberately, his prayer is nullified. If however, he leaves it due to forgetfulness, then if he goes on and reaches its place in the next rak`ah, then he discards the rak`ah which he forgot it in, and the following one takes its place.

If he has not reached its place in the next rak`ah, then it is obligatory upon him to return to the missed pillar and to perform it and whatever comes after it. In either of these two cases it will be obligatory upon him to perform prostration for forgetfulness after the taslim. An example (of this) is the case of a person who forgets the second prostration in the first rak`ah, but remembers this whilst sitting between the two prostrations in the second rak`ah. So he should discard the first rak`ah and the second one will take its place, so he counts that as his first rak`ah and completes his prayer based upon that.

If the person praying leaves an obligation from the obligations of the prayer deliberately, then his prayer is nullified. If however, he does so due to forgetfulness, and he remembers it before moving on from its place in the prayer, then he should perform it, and there is nothing upon him. If he remembers it after having moved on from its place in the prayer, but before reaching the pillar that follows it, then he returns to it and performs it. Then he completes his prayer and gives taslim, prostrates for forgetfulness, and gives taslim. If however, he remembers it after reaching the pillar that follows it, then it is cancelled, so he should not go back to it but should continue his prayer and then prostrate for forgetfulness before giving the taslim.

An example of that (is where) a person raises himself up from the second prostration in the second rak`ah in order to stand for the third rak`ah, forgetting the first tashahhud. But he remembers before actually getting up, so he should remain in the sitting position, perform the tashahhud, and then complete his prayer and there is nothing upon him. However, if he remembers after beginning to stand, but before standing straight, then he should return to the sitting position and perform the tashahhud.

He should then complete his prayer and give the salutation, prostrate for forgetfulness, and give the salutation. If he remembers after standing straight, then the tashahhud is cancelled for him, he does not return to it. Rather he continues and completes his prayer, and prostrates for forgetfulness before giving the taslim. The proof for this is what is reported from ‘Abdullah ibn Buhaynah (may Allah be pleased with him) who said that, “The Prophet (peace be upon him) led them in Zuhr (Noon) prayer. He stood after the first two rak`ahs and did not sit (meaning for the first tashahhud), so the people stood along with him. Then when it came to the completion of the prayer and the people awaited his taslim, he said takbir whilst sitting and performed two prostrations before giving the taslim. Then he gave the taslim.” (Al-Bukhari and Muslim)

What Is the Ruling of Movements in Prayer?