Why Must the Slave of Allah Perform Prayer? 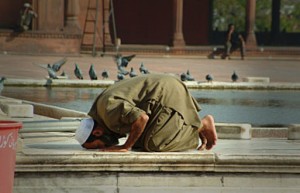 As life on earth progressed God brought forth Prophets to deliver a message; a message of worship.

Yes, success. What perfect placement of these phrases: come to pray and take your success. Like macaroni and cheese, it’s plain and simple. Placed so cleverly and poetically within the Adhan, (the Islamic call to prayer), we hear this 5 times a day, but how often do we listen and follow?

Amidst chow downs, midterms, and movies, finding time to pray for youth has become somewhat of a difficult task. Many of us spend countless hours engrossed in the latest songs and tabloids, immersed in worldly matters or even grueling over a school assignment; those have become our priorities in dunya (this world). But, what about our priorities for the akhira (Hereafter)?

Nowadays, some of us find it a chore to spend scarcely 5 minutes out of the 1440 minutes in a day prostrating to our Lord in repentance for our sins and seeking refuge from our worries. We have stopped giving salah (prayer) the importance it holds.

Prayer is an obligation, not a choice—as many Muslims these days make it out to be. Salah is one of the things that Allah subhanahu wa ta’ala (Glorified is He) has Himself prescribed; I say prescribed, because it is the one true remedy to our worldly worries.

Guard strictly the Salah, especially the middle Salah. And stand before Allah with obedience. (Al-Baqarah 2:238)

Salah reminds you of Allah (Exalted is He), when you get up in the morning, it reminds you three more times when you are busy during the day, and once again before you go to bed.

There is No Fulfillment for Anyone but Us via this Act

Success requires fulfillment, which requires nourishment by the purest means. What better nourishment for yourself than the mercy, guidance, and rewards from the Almighty? Allah lures us to worship with lavish descriptions of Jannah (Paradise), whilst simultaneously warning us of repercussions of disobedience—the wretchedness of hellfire.

And their recompense shall be Paradise, and silken garments, because they were patient. Reclining on raised thrones, they will see there neither the excessive heat of the sun, nor the excessive bitter cold, (as in Paradise there is no sun and no moon). The shade will be close upon them, and bunches of fruit will hang low within their reach. Vessels of silver and cups of crystal will be passed around amongst them, crystal-clear, made of silver. They will determine the measure of them according to their wishes. They will be given a cup (of wine) mixed with Zanjabil, and a fountain called Salsabil (a spring in Paradise). Around them will (serve) boys of perpetual youth. If you see them, you would think they are scattered pearls. When you look there (in Paradise) you will see a delight (that cannot be imagined), and a Great Dominion. Their garments will be of fine green silk and gold embroidery. They will be adorned with bracelets of silver, and their Lord will give them a pure drink. (Al-Insan 76:12-21)

The earliest known story of the universe begins with the concept of prayer—the story of the residents of Paradise. When Allah created Adam (peace be upon him), all beings were asked to prostrate to him, not as a form of worship, but to recognize the beauty fashioned by the Creator. Iblis (Satan) refused and the outcome was eternity in hellfire.

As life on earth progressed God brought forth Prophets to deliver a message; a message of worship. Performing prayer can be traced to the earliest of generations beginning with the blessed Prophet Ibrahim (peace be upon him).

My Lord, make me an establisher of prayer, and [many] from my descendants. Our Lord, and accept my supplication. (Ibrahim 14:40)

As we dig deeper into the Qur’an we encounter many instances where prayer is mandatory upon the Prophets and their people.

Indeed, I am Allah. There is no deity except Me, so worship Me and establish prayer for My remembrance. (Ta-Ha 20:14)

And establish prayer and give zakat and bow with those who bow (in worship and obedience). (Al-Baqarah 2:43)

As I sit among peers and the clock winds down for prayer, I slyly wander off to an empty room to fulfill my duty to my Creator, careful not to offend those who choose to ignore this obligation. The reasoning is ridiculous. The act of worship is a form of da`wah (invitation).

This should not be something I am afraid to do and have to hide or feel uncomfortable sharing; rather, it should be something enjoined together and encouraged, a journey to purification in tandem. But why is it that as I leave the room to go pray, I find myself feeling guilty, or awkward, for telling my Muslim friends that I am performing salah while they choose to sit idly? This taboo of praying is something that needs to be rectified.

As a convert, this seems bewildering. To have a Muslim choose not to pray seems oxymoronic and unconventional. Islam conveys the consequences of not, and the benefits of praying very clearly. Every salah prayed counts towards good deeds on the Day of Judgment. We have been told there will be instances when those who have prayed, but their good deeds do not outweigh the bad, will wind up in hellfire. Once their term is served, they will be granted Jannah.

The Prophet (peace be upon him) describes the Hereafter, and in which he says:

“…When Allah has finished judging mankind, and wants to bring whomever He wills out of Hell by His Mercy, He will order angels to bring forth those upon whom He wishes to bestow His mercy of the people who never associated anything in worship with Allah, and who said, ‘Laa ilaaha illaah Allah’. The angels will recognize them in Hell, and will know them by the mark of sujud (prostration) on their foreheads. The Fire will consume all of a man except the mark of sujud which Allah has forbidden the Fire to consume. They will be brought forth, having been burned in the Fire, the water of life will be poured on them, and they will grow like seeds left by still after a flood.” (Sahih Muslim)

Let’s try to fathom this concept. Salah will distinguish the devout from the non-believer in hellfire.

What is between Belief and Disbelief is Leaving Prayer

Rarely do we glimpse a follower of another religion devote his entire being to the worship of his Lord prior to, or in addition to, supplication. Prayer in Islam envelopes both mind and body to the sole worship of God; glorifying Him, praising Him, exalting the Benevolent. This form of worship differs from other religions in the sense that other religions use supplication as the sole act of worship, whereas for Muslims, they serve two completely different purposes.

In modern day society, the pressures facing the Ummah (Muslim community) are great; however, the remedy can be just as simple—by keeping steadfast in the daily prayers and having tawakkul (reliance on God), we make ourselves vulnerable to Allah’s help and mercy. We all have an inherent thirst, a thirst for feeling whole, complete, accepted. A thirst quenched by prayer. The Creator can give and He can take. The more we rely on Him, the easier our lives become. The further we go from Him, the further He goes from us, too.

Abu Hurairah (may God have mercy on him) reported that the Messenger of Allah said: ”The nearest a servant comes to his Lord is when he is prostrating himself, so make supplication (in this state).” (Al-Bukhari)

For our iman (faith) to grow, we need the proper infrastructure. Buildings use pillars to support their structure. Growth is weak without a solid foundation. Salah is the second pillar in Islam, the foundation of the religion. There are five pillars in Islam which a Muslim considers the basis of faith: Shahadah (testimony of faith), salah, zakat (charity tax), sawm (fasting), and hajj (pilgrimage). If a person is ill, he/she is excused from fasting; if a person is poor, he/she is excused from paying zakat or performing hajj; however, there is no excuse for salah (aside from the monthly impurities women face). If a person is sick, he may pray sitting down. If he cannot do so, then he may pray lying down, if that is impossible, then he may pray with his eyes. Case in point, no excuses.

Allah has commanded us to indulge in the purification of our souls. The modern day focus lies on perfecting the physical appearance; whereas, the Islamic perspective is rooted in perfecting the inward appearance. Insha’Allah (God willing), we take a few minutes out of our day to hurry to success and thank the Almighty, to ask from the Almighty, and to worship the Almighty.

May we uphold His decree to the best of our abilities and be rewarded with Jannah.

One thought on “Why Must the Slave of Allah Perform Prayer?”

Salaah Benefits the Muslim as:

1) Brings them closer to Allah
2) Helps them become more respectful to Allah, and also helps them from stopping future sins. As the Prophet pbuh said “Salaah protectors against sins”
3) Salaah washes away minor sins