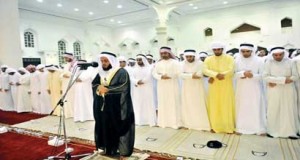 The Tarawih prayer, one of the few supererogatory prayers prayed in congregation, has an important function in respect to enabling the praying persons to get to know one another.

The Tarawih prayer, being offered in congregation, has an important function in respect to enabling the praying persons to be introduced to one another, draw closer to one another and become reconciled.

When the Tarawih is performed, Muslims are better able to comprehend their distinct identity. In addition, it allows them to feel unity with their Muslim brothers, and strengthens their family, friendship and neighborly ties.

The word Tarawih is the plural form of “tarwiha” which means sitting or resting. It refers to a prayer exclusive to Ramadan that can be performed singly or in a congregation. It is called Tarawih because there an interval for rest after offering four Rak`ahs (units of the prayer).

The Prophet (peace be upon him) stated, “Allah has made Ramadan fasting compulsory for you; and I have made the Tarawih (an act of) Sunnah for you.” (Ibn Majah and Ahmad)

The Tarawih prayer is one of the binding Sunnahs, and characteristics of Ramadan. A Muslim who shows obedience to his Lord by fasting on the day would strive to get closer to Allah and seek forgiveness from Him at night by means of the Tarawih.

The Prophet indicated that the night prayer was the custom of the pious persons who lived before the coming of Islam, and that it drew people closer to Allah and protected them from sin.

He said: “Whoever fasts Ramadan out of belief in Allah and expecting (Allah’s) reward will have his past sins forgiven.” (Al-Bukhari and Muslim.

“I see how eager you are to make the Tarawih prayer with the congregation. There was no obstacle preventing me from leading you in prayer. However, I did not do it because I feared that it might become obligatory upon you.” (Al-Bukhari)

This hadith describes the nights of Ramadan during the time of the Companions. It shows us how eager the first generation of Muslims was to offer the acts of worship with the Prophet, their devotion to the Sunnah and the Prophet’s love and compassion for his followers.

Stressing the importance of night prayers, the Prophet (peace be upon him) was even more careful about this matter in Ramadan; he made his recitation longer on the nights of Ramadan. Hudhayfah ibn Al-Yaman (may Allah be pleased with him) reported that the Prophet (peace be upon him) once recited Surahs (chapters of the Qur’an) of Al-Baqarah, Aal `Imran and An-Nisaa’ while standing in a Prayer. (Ahmad)

The Caliph `Umar saw a group of Companions praying behind Ubay ibn K`ab (may Allah be pleased with him) during the month of Ramadan. He said with approval, “What a good act you are doing! This event shows the legitimacy of offering the Tarawih prayer behind an Imam (leader in congregational prayer).

Our responsibility is to grasp the importance of this prayer in this beautiful month and observe this act of worship.