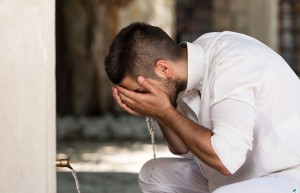 Performing ablution not only cleanses the vital parts of the body from dirt and dust but also softens and refreshes them.

Islam is the religion of cleanliness and purification. Islam affirms that every human being is born in a state of purity, which is known as fitrah. Being in a state of purity is a fundamental and an essential part of faith. Abu Malik Al-Ash`ari (may Allah be pleased with him) reported that the Messenger of Allah (peace be upon him) said: “Purity is half of iman (faith).” (Muslim)

A Muslim must be ritually clean in order to offer the five daily prayers. Without purification, the prayer is invalid as the Almighty Allah obligates and makes it a condition for prayer:

O you who have believed, when you rise to [perform] prayer, wash your faces and your forearms to the elbows and wipe over your heads and wash your feet to the ankles. (Al-Ma`idah 5:6)

Ablution is a distinct feature of this nation unlike other nations. Prophet Muhammad (peace be upon him) said, “On the Day of Resurrection, my Ummah (followers) will be summoned with white faces, and white hands and feet on account of the traces of ablution.” (Al-Bukhari and Muslim)

What is meant by ablution (wudu’) in Islam?

1- Washing hands up to the elbows,

3- Wiping over the head,

4- Washing the feet up to the ankle,

There are some voluntary but recommended acts that the Prophet (peace be upon him) used to do while making ablution such as rinsing the mouth, sniffing water into the nostrils …etc.

It plays an important role in the life of the Muslims as it keeps him always in a state of vitality and vigilance. It was narrated that the Prophet (peace be upon him) said, “He who performs ablution perfectly, his sins will depart from his body, even from under his nails.” (Muslim)

Offering ablution with cool water causes some changes inside our bodies. Water is the largest constituent of the human body. Total body water averages 60% of body weight. Water has a large heat capacity which helps limit changes in body temperature in a warm or cold environment. Water allows the body to release heat when ambient temperature is higher than body temperature. Therefore, ablution plays an important role in cooling the body regularly.

Here are some medical benefits of ablution that the modern science has proven:

1- Performing ablution not only cleanses the vital parts of the body from dirt and dust but also softens and refreshes them.

2- Inhaling water into nostrils during ablution prevents germs and dust trapped inside from entering the body.

3- Washing the face protects the outer layer of the skin and also relieves the feelings of overtiredness and fatigue. Performing ablution regularly maintains the beauty and freshness of the face as you get older.

4- Rinsing the mouth during ablution is so important because the water removes the food remnants which cause teeth problems and bad smells.

5- Washing the ears helps getting rid of the extra wax that may cause ear infection. Also, wiping over the back of the ears prevents inflections like mastoiditis from arising.

6- Ablution helps prevent skin cancer because the areas that are washed during ablution are the parts of the body that are most prone to be exposed to pollution, whether it is pollution from the internal secretions of the body on to the skin surface, such as sweat, or whether it is external.

7- Washing with water helps invigorate the ends of the blood vessels, as well as the nerves and glands that are near the skin surface, and hence helps them perform their functions efficiently.

8- Washing between the toes during ablution, is also extremely important as it prevents the foot, which in our modern times is trapped most of the day inside shoes, from acquiring athlete’s foot.

It is recommended to perform ablution not only before offering prayer, but also before going to bed, reciting the Qur’an, entering the mosque, making the call to prayer, delivering a khutbah, after visiting the graveyard, and touching or carrying a dead person. Finally, there is a divine wisdom and goodness in all His divine rulings, and they are in our best interest that we may or may not know.