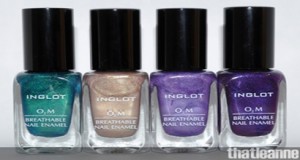 When a woman wants to perform wuḍu’ (ablution), she has to remove the nail polish if any as it is required that the water reaches every part of the wudu’ organs.

One of the most common questions asked by Muslim sisters is whether or not they are allowed to wear nail polish. The frequent query about whether nail polish is lawful or unlawful is worded incorrectly. There is nothing intrinsically wrong with wearing nail polish. The real issue is that this substance forms an impermeable barrier over the nails preventing water from getting underneath. So, when a woman needs to perform wuḍu’ (ablution) in order to pray, it cannot be completed without first removing the nail polish.

Many Muslim women have found a solution: wear the nail polish during their period since they don’t need to pray during those days. Yet, many women admit that they wish it would be somehow possible to wear nail polish at any time of the month because  it is highly fashionable nowadays and, according to them,  wearing nail polish may indicate to others that a woman is undergoing her period, which can be very embarrassing for others to know.

Now there is a solution. No, I’m not talking about wearing henna. Most scholars advise it as a substitute while failing to realize just how different henna is from nail polish in the world of fashion and beauty. The urge to wear nail polish on a regular basis has even led some sisters to wear a ‘peelable’ variety, which can be scraped off without any chemicals. But what if there was a nail polish that allowed the water to seep through?

Good news. Inglot Cosmetics, a company from Poland, has released a new line of polish called O2M that it has labeled “breathable nail enamel”. It borrows a polymer used in some contact lenses that allows oxygen and moisture to penetrate to the nail.

One sister wisely decided to call the company and was told that water vapor reaches the nail but not water in its liquid form. The question then arises about whether water vapor reaching the nail suffices for wuḍu’. Let’s look at the issue in detail.

Reasoning Behind the Necessity of Washing

There are several sisters who don’t know that nail polish prevents wuḍu’, and probably just as many who don’t care and will wear it anyways. But for those who do care, this analysis might help clarify things.

Muslim scholars have analyzed the issue of impermeable substances in the following manner. This verse of the Qur’an prescribes the wuḍu’:

The points that require investigation are: what is meant by ‘arms’ and what is meant by ‘wash’. Mention of the word ‘arms’ (which includes the hands linguistically in Arabic) indicates that every part must be washed and not a single spot should be left dry. Scholars arrived at this conclusion both through linguistic analysis as well as by analyzing reports from the Prophet (peace be upon him) which emphasize that the body parts must be washed thoroughly.

From this they concluded that anything that prevents water from reaching any of these parts must be removed. For example, if someone had dried paint, dough, or wax on their hand while performing wuḍu’, the water would not permeate that substance and the hand would not be properly washed.

The same is true with nail polish which, when dried, forms a solid impermeable layer on the nails. This is why women are instructed to remove their nail polish when performing wudu’. Other substances that do not form an impermeable solid layer, such as henna, oil, ink, and lotion, are allowed due to the ability of water to penetrate through, especially when rubbing over the wet area.

As to the definition of ‘washing’, it means that water flows over the surface of every body part which must be washed during wuḍu’. The bare minimum amount of water that must be used in order to suffice has been a matter of contention among scholars. Some stated that the part being washed must drip off at least one drop of water. Other scholars held that water must reach every area of that body part, but dripping off is not necessary.

The important thing to realize is that these scholars were trying to precisely define a minimum point at which the body part in question has had water ‘flowed’ over it. The first opinion did not imply that drops of water must drip from any particular area but rather from any area of one body part.

For example, while washing the arm with the hand elevated above the elbow, it is likely that the water would drop off near the elbow area due to gravitational forces. For our case concerning the fingernails, this opinion (which is the stricter of the two) does not necessitate water having to drip off the fingernails. This makes sense because water usually drips from a small area when it has completely flowed over that region.

Based on this difference of opinion concerning the definition of washing, scholars have differed concerning whether rubbing snow over the body parts suffices for wuḍu’ if no drops fall off. At first glance, it might appear to a student of Islamic Law that this example serves as a good analogy to apply to the issue of breathable nail polish.

However, upon further inspection the analogy fails because the case of snow involves no drops falling whereas the case of the fingernails does involve drops falling, even if not from the nail area. Keeping this in mind, if the entire hand was immersed in water and water vapor permeated through to the nails, it would not matter whether or not an actual drop of water in its liquid form reached the nail. The entire hand is still considered washed since water reached every area.

One of my students decided to perform a test to see whether or not water actually seeped through when using the Inglot O2M nail polish. As a test case, she applied standard pink nail polish and purple O2M on a coffee filter and allowed both to dry. She then placed another coffee filter below the painted one, squeezed two drops of water over the polish, and applied some pressure with her finger.

After about ten seconds it was clear that the water was prevented from seeping through (even to the back side of the first filter) on the standard polish but clearly went through the O2M and even wet the second filter. This is sufficient to show that the claims made by the manufacturer are correct and water does indeed permeate through to the nail. Conclusion

It is imperative that issues such as the legitimacy of wearing breathable nail polish while performing wuḍu’ be properly researched both on the scientific level as well as the fiqh (Islamic jurisprudence) level. It appears to me that there is a sound basis for believing the water seeps through to the nail when wearing O2M breathable nail polish. Perhaps not every brand that claims to be breathable meets this criteria and perhaps the nails need to be soaked in water for a few seconds.

Nonetheless, the basis exists for permissibility. As for the questions concerning whether or not nail polish should be used by Muslim women in public, which colors may potentially cross the boundaries of modesty (ḥaya’), and whether these cosmetics are an extravagant use of one’s wealth, they are all beyond the scope of this article and not directly related to the issue at hand. Sisters must consider all those variables before using any cosmetics, but after they have done so, the research on breathable nail polish points to its permissibility.