Seeking Refuge in Allah during Prayer 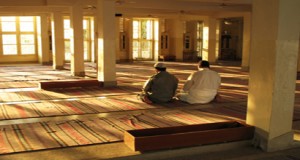 We have been taught to seek refuge with Allah from the accursed devil before we begin to recite the Qur’an in prayer.

Do you know that Satan becomes extremely envious when a person is standing in prayer before his Lord? And thus he does everything he can to get the worshiper out of that elevated state- by distracting him or her to think about other things. And all too often, unfortunately, we accept the invitation. The likeness of Satan is to that of a fly – every time one pushes him away, he comes back.

We have been taught to seek refuge with Allah from the accursed devil before we begin to recite the Qur’an in prayer. The devil’s impact is substantial – when we come to pray we remember things that previously escaped our memory and we think of solutions to our biggest problems.

By the time we say “salam” at the end, we do not remember what we have said in the prayer or even how many rak`ahs we prayed. If this description fits us, Ibn Al-Qayyim says that this person leaves the prayer the same way he entered it – with all of his sins and burdens unexpiated. If this is how it is in this life, can we imagine how it will be in the next? In the Qur’an, Allah (Glory be to Him) tells us of the scenario on the Day of Judgment:

And Satan will say when the matter has been concluded, “Indeed, Allah had promised you the promise of truth. And I promised you, but I betrayed you. But I had no authority over you except that I invited you, and you responded to me. So do not blame me; but blame yourselves. (Ibrahim 14:22)

Imagine- being duped and distracted and then having that sealed with remorse on the Day of Judgment. The Prophet (peace be upon him) said:

“A person may pray and have nothing recorded for it except a tenth of it, or a ninth, or an eighth, or a seventh, or a sixth, or a fifth, or a quarter, or a third, or half.” (Abu Dawud)

So the Satan wants to decrease our reward by stealing what he can from our prayers. It is as though we have already been given up all of our rewards but we must guard them- every time we become heedless the Satan steals some of it. And for some of us, he keeps on stealing until we are left with nothing.

Sheikh Al-Shinqiti (Saudi Caller to Islam) tells us that Allah the Almighty has shown us how to guard ourselves from the human demons and from the demons of the jinn. Allah says:

And who is better in speech than one who invites to Allah and does righteousness and says, ‘Indeed, I am of the Muslims.’ And not equal are the good deed and the bad. Repel [evil] by that [deed] which is better; and thereupon the one whom between you and him is enmity [will become] as though he was a devoted friend. (Fussilat 41:33-34)

Thus to protect ourselves from the human demons, we should do the above – repel evil with good. This will not only protect us but it might make that enemy a warm friend. This is not easy, which is why Allah  says straight afterward:

But what about the demons from the jinn? We cannot use the same method above. So what do we do? Seek refuge in Allah, as Allah tells in the verse directly following the one mentioned above:

And if there comes to you from Satan an evil suggestion, then seek refuge in Allah. Indeed, He is the Hearing, the Knowing. (Fussilat 41:36)

It is related that an old man asked a young lad what he would do if he saw Satan.

“I would hit him,” the young man said.

“I would hit him again,” he replied.

And the old man asked the same question, and the young man gave the same response.

Shaking his head, the old man said, “If you were walking on a road and a ferocious dog came to you, how often would you hit him to make sure he doesn’t come back? Rather the smarter way is to ask the master of the dog to remove it from your path.”

And this is why we seek refuge in Allah when we begin the prayer. Ibn Al Qayyim said that it is narrated that when we commence the prayer, Allah orders for the barrier between us to be lifted and we are directly facing our Lord, yet if we turn away (i.e. get distracted) the barrier is brought back down. And it is in these moments of heedlessness that the Satan tries to make one thought lead to another but when the barrier is removed, Satan does not dare to distract us.

Thus, let us seek refuge in Allah from the Satan, truly think over the meaning of that supplication, and guard ourselves from Satan throughout the prayer.