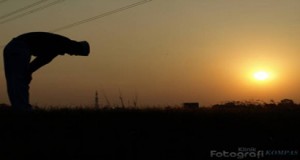 Many of us rush our bowing and prostration, but it is very important to give each action its due measure.

Preparing ourselves for the prayer means realizing whom we are meeting with—Allah (Exalted is He), our Lord, the Most Merciful of those who show mercy. We beautify ourselves externally because we are meeting with Allah, and we humble ourselves internally as we stand before the Most High. We stand between fear and hope, but the overwhelming emotion is love.

When we recite Surat Al-Fatihah (the Opener), we pause after every verse to reflect on it, knowing that Allah responds. When we recite a short surah (chapter) afterward, we recognize that these words are a message to us.

The External Acts of Ruku`

When finish reciting the short surah after Al-Fatihah, we should implement a very short pause just as the Prophet (peace be upon him) did (as related by Abu Dawud), and then raise our hands to say, “Allahu Akbar (God is Greatest).” Remember that between almost every change of position we say, “Allahu Akbar.”

This is to remind ourselves and to alert us that Allah is greater than anything—whatever our mind is distracted with and whatever worries plague us. And then we bow down in bowing. When we bow down, we should emulate the actions of the Prophet who said:

“When you make ruku`, place your palms on your knees, then space your fingers out, then remain (like that) until every limb takes its (proper) place,” (Ibn Khuzaymah)

In another narration, he added that we should straighten our backs. (Abu Dawud)

Many of us rush our bowing and sujud (prostration), but it is very important to give each action its due measure. The Prophet (peace be upon him) once saw a man not completing the bowing properly, and rushing his prostration such that he looked like he was pecking, and he said:

“Were this man to die in this state, he would die on a faith other than that of Muhammad—the likeness of one who does not make ruku` completely and pecks in his sujud is like the hungry person who eats one or two dates, which are of no use to him at all.” (At-Tabarani)

Why did the Prophet use such an example? Because we come to our prayer as people who are spiritually hungry and thirsty, looking for a refuge from the worries of the world. It does not make sense for a starving person to eat one or two dates if he has access to more; neither does it make sense for us to rush our bowing and prostration.

Just as we discussed previously that there are different opening supplications, there are also a variety of supplications of bowing. We should try to memorize them and vary what we say so that we are conscious of them and so they do not become words we simply repeat.

We should say three times:

“How Perfect is my Lord, the Supreme.” (Ahmad and Abu Dawud)

When we say “Subhan Allah” or “Subhan Rabbiya,” we are disassociating Allah from any imperfection or impurity or from anything derogatory. And we say “Rabbiya” meaning “my Lord” in order to feel closeness to Him and love Him.

“Exalted, Pure, Lord of the Angels and the Spirit.” (Muslim)

Subuh comes from the same root word of subhan, which is Sa-Ba-Ha, and is an aggrandizement of subhan, meaning the Exalted One who is praised and glorified extensively. It has been debated by scholars as to what the ‘Spirit’ refers; most have said that it refers to Jibreel (peace be upon him), others have said it is another great Angel, and others have said that it is a formidable being that not even the Angels can see. Allah knows best.

“How Perfect You are, O Allah. Praises are for You. O Allah, forgive me.” (Al-Bukhari and Muslim)