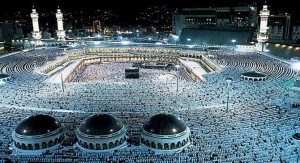 The Prophet heard a baby crying for his mother, so he recited a short chapter of the Qur’an, so as not to cause difficulty for the mother.

The Prophet (peace be upon him) remains in his house until the call is given for the Night Prayer, `Isha’.

He does not hasten to offer `Isha’ as soon as it comes in. Instead, he waits to see that the people have gathered for prayer.

If they assemble in the mosque early, he leads them in prayer early. If they come later, he does so as well, which is what he prefers.

He only offers the `Isha’ prayer as early as he does to keep things easy for the people.  On one occasion, he delayed the `Isha’ prayer for a very long time, until `Umar (may Allah be pleased with him) went and called out to him: “Messenger of Allah, the women and children have fallen asleep.”  The Prophet comes out and says: “This is the time to offer the prayer. If it were not for the difficulty I would cause for my community, I would have ordered them to observe the `Isha’ prayer at this hour.” (Al-Bukhari)

He delays the `Isha’ prayer for a long time one other night. Just as the people are about to pray, a man stands forth and says: “Messenger of Allah, I have a pressing need for you.”

The Prophet (peace be upon him) goes off with the man to discuss his problem with him. By the time he returns to the mosque, some of the people have dosed off.  However, after prayer on one of the nights he delayed, he tells them: “Take heart. It is Allah’s blessing and favor on you that there are no other people praying at this hour beside yourselves.”

After hearing these glad tidings, the Prophet’s companions returned to their homes with joyful hearts.  He also reassured them on one occasion: “Indeed, some people have prayed and gone to bed. As for you, you are in prayer as long as you are waiting for prayer.”

Prophet Muhammad leads a prayer that is both short and complete. Anas (may Allah be pleased with him) will later recall his prayers and say: “I have never yet prayed behind any imam whose prayer was lighter yet more perfectly complete than the prayer of Allah’s Messenger.” (Al-Bukhari)

The Prophet (peace be upon him) hears a baby crying for his mother, so he recites a short chapter of the Qur’an, so as not to cause difficulty for the mother. He says: “I start my prayer intending to recite for a long time, then I hear a child crying and make the prayer brief, because I know how much a mother is troubled to hear her baby crying.” (Al-Bukhari)

After `Isha’ prayer, he sometimes speaks to his companions about a new development that has come up. He only does so on rare occasions, and then he keeps it very brief. He knows the people are tired and need to sleep. This is why he dislikes long conversations after the `Isha’ prayer.  Near the very end of his life, he will say at this time: “Do you see this night of yours? In a hundred years, no one who is on Earth today will still be alive.”

After the `Isha’ prayer, the Prophet (peace be upon him) waits seated until the women have a chance to depart for their homes. Only then does he stand to leave, and the men stand with him.