In the name of Allah, we praise Him, seek His help and ask for His forgiveness. Whoever Allah guides none can misguide, and whoever He allows to fall astray, none can guide them aright.

What is Eid in Islam?

Muslims celebrate two Eids each year. The Eid day starts by performing a prayer that is one of the most recommended acts to Muslims and they consist of two rakahs and a sermon that reminds them of the Islamic ethics. The first, Eid Al-Fitr, occurs when Muslims have finished fasting the month of Ramadan, while the second, Eid Al-Adha, signals the end of the first 10 days of the lunar month, Dhul-Hijjah. 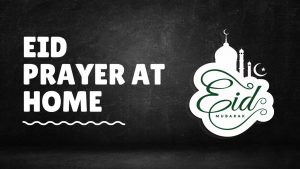 How many Rakahs of Eid Prayer?

Ibn `Abbas (may Allah be pleased with him) narrated that the Prophet (peace be upon him) went out and offered a two rakahs prayer on the Day of Eid Al-Fitr and did not offer any other prayer before or after it and at that time Bilal was accompanying him. (Al-Bukhari)

The first rakah begins, just like all other prayers, by takbirat al-ihram (the first takbeer made by the praying person, and by which he begins the prayer), then by making seven more takbeer, and in the second rakah – five takbeer are made excluding the takbeer of standing back up.

`A’ishah (may Allah be pleased with her) narrated that the Messenger of Allah (peace be upon him) would say the takbeer (Allah is most great) seven times in the first rakah and five times in the second rakah on the day of the breaking of the fast and on the day of sacrifice (on the occasion of both the ‘Id prayers, the two festivals). (Abu Dawud)

What is the Ruling of Eid Prayer?

The scholars have three opinions regrading the ruling of Eid Prayer:

Eid Prayer is Sunnah Mu’kkadah according to Maliki and Shaf’i jurisprudence.

It is communal obligation. This is the view of Imam Ahmad.

It is a duty for each Muslim and is obligatory for men; those who do not do it with no excuse are sinning thereby. This is the view of Imam Abu Hanifah, and was also narrated from Imam Ahmad. Among those who favored this view were Sheikh al-Islam Ibn Taymiyah and Ash-Shawkani (may Allah have mercy on them).

What is the Ruling of Offering Eid Payer at Home due to Covid-19?

In light of the masajid being shut down due to the COVID-19 crisis and the upcoming Eid prayers, the Muslims are encouraged to pray Eid in their homes with their own families (or individually in case one is living by oneself), and there is no need for a khuṭbah.

While the general rule is that Eid ṣalat should be prayed in a large congregation, it is permissible even in regular circumstances for the one who missed Eid to make it up at home. Anas ibn Malik (may Allah be pleased with him) once missed the Eid prayer in Basrah, so he gathered his family and had one of his household lead them in two rakahs. And Aṭa’ ibn Abi Rabaḥ (d. 114 AH) said regarding one who missed the Eid prayer, “Let him pray two rakahs and say the takbeer“; as well Hammad ibn Abi Sulayman (d. 120 AH), the famous scholar of Kufa and teacher of Imam Abu Hanifah, said when asked the same question, “He should pray as they prayed, and do the takbeer as they did.” [Muṣannaf of Ibn Abi Shaybah, 2/4-5]. All of these reports are regarding those who missed Eid for any reason.

Given our current situation, we advise families to observe all of the Sunnahs of Eid (of taking a ghusl, eating a breakfast, wearing one’s best garments, saying the general takbeer after Fajr, etc.) and then praying a congregational prayer at home with their own families, with the special takbeer of Eid.

All our four schools of law state that attending the khuṭbah of Eid is not obligatory, nor is the khuṭbah a requirement of the Eid prayer, it is not required to give Khutbah in every home.

How to Pray Eid Salah – step by step?

One can Pray after 15 minutes of sunrise.

– Eid Payer should be in the same manner like Masjid or mosque.

– Eid payer will be two rakahs, the surah should be read out loud. This includes Surat Al-Fatihah (the Opening Chapter) and another short surah.

– In the first rakah, there will be seven takbeer. This includes the opening takbeer to start the prayer, followed by six more, recite surat Al-Fatihah, and then a short surah (Surat Al-`Ala is recommended).

– In the second rakah there will be five takbeer after you get up, followed by reciting surat Al-Fatihah and a short surah (surat Al-Ghashiah is recommended).

– One can raise both hands out for each takbeer.

We would like to wish you and your loved ones Eid Mubarak!