Ruling on Children Praying in the First Rows 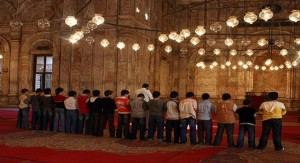 Mosques are Allah’s houses where all people are to be treated equally.

Some scholars are of the opinion that children are to be positioned in the last rows in prayer and that if any of them has stood in the  first rows, they are to be moved to the back ones. However, the most considerable opinion in this regard is that if a reasonable child has arrived earlier to the mosque and stood in the first row to perform prayer, he has every right to remain in that place until the end of the prayer, and nobody is allowed to move him to a back row.

If a man, even an old person, comes after that child, he is to stand in the row he finds empty, even behind the child. This is because moving children to the back rows may make them feel belittled and thus dislike going to mosques.

In this regard, we would like to cite the following fatwa issued by the eminent scholar, Sheikh Ibn `Uthaymeen, may Allah have mercy upon him!

He was asked, “Does arranging rows in prayer require that adults stand in the first rows and children be in the back ones?”

He replied, “Some scholars say that adults should immediately follow the imam (prayer leader) and that children should be in the back rows. If, for example, the row is to be formed of a hundred persons and there are a hundred men and a hundred boys prepared to perform the prayer, the hundred men are to form the first row and the boys are to form the second one because putting the rows in order requires that the adults follow the imam.

Those scholars quote as their evidence for such opinion the Prophet‘s hadith: “Let the wise men among you stand behind me in the Prayer.” (An-Nasa’i)

But such an opinion needs to be reviewed. My point of view is that if a child goes earlier to the Mosque and stands in a certain place for Prayer, he has every right to that place. There is much evidence to the effect that he who gets something before anyone else has every right to it.

Besides, mosques are Allah’s Houses where all people are to be treated equally; so, if a child goes first to a mosque and stands or sits in the first row, he is to remain there (till the end of the prayer or the speech of the imam). Furthermore, if we say that children are to be moved from the best place (the first rows) and be positioned in the last row, they might give up concentrating in the Prayer or the speech and start playing with one another.

Besides, moving the children to the back rows may result in two undesirable things.

The first one is that the children moved may dislike going to mosques, for moving them against their will belittles them. Children should not be treated like this, for they do not easily forget the way they are dealt with.

The second thing is that the children may dislike the men who have moved them to the back rows.