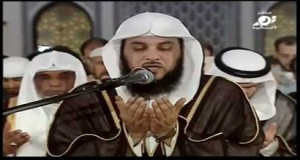 The Prophet said: “Supplicate to Allah with the palms of your hands and do not supplicate to Him with your backs upward.”

What is the evidence of raising hands in Qunut during Witr (the odd prayer) Prayer?

For example, among the general proofs is what Ibn ‘Abdur-Rahman ibn Qasim An-Najdi (may Allah have mercy upon him) stated in his book ‘Hashiyat Ar-Rawd’ as he said: “Malik ibn Yasar (may Allah be pleased with him) narrated that the Prophet (peace be upon him) said: “Supplicate to Allah with the palms of your hands and do not supplicate to Him with your backs upward.” (Abu Dawud)

Moreover, the Prophet (peace be upon him) said: “Your Lord is bashful (which implies not refusing or rejecting one’s supplication) to turn away His slave empty-handed (i.e. not responded to) when he raises them asking Him for any good.” (Ahmad, Abu Dawud, At-Tirmidhi and Ibn Majah)

Also, raising the hands when supplicating is confirmed with Tawatur (i.e. narrated from a large group of narrators).

According to the Hanafi School, it is legislated to raise the hands at the beginning of Qunut –like raising them for starting the prayer– and then put them down. However, they have not provided any evidence or justification for this.

According to another opinion of the Hanafi School, it is allowed to raise the hands and keep them raised during the supplication of the Qunut, as mentioned in “Hashiyat ibn ‘Aabideen”.

It is also said that it is preferable when one supplicates –as narrated from Abu Yusuf- that one should raise hands up to the level of chest while turning the palms to the sky. It appears according to this narration that he keeps them in this position (i.e. hands raised up) until the end of the supplication.”