Mistakes Made by People While Praying (1/2) 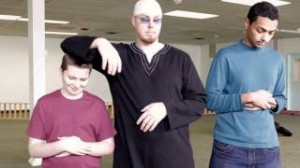 It is agreed upon that preceding the Imam intentionally invalidates the prayer.

It is well known to every Muslim that sincerity to Allah and compliance with the Sunnah of the Prophet (peace be upon him) are the two conditions for the acceptance of deeds and that any deed that does not meet these two conditions is rejected.

The Prophet (peace be upon him) said: “Whoever does something that does not belong to our matter (religion), it will be rejected.” (Muslim)

Because of the importance of prayers and its great position in Islam and the fact that many people take them lightly and violate many of their rulings, it was necessary to highlight important points regarding the mistakes that are made by some people while praying. Additionally, it is equally important to clarify the positions of the imam (prayer leader) with respect to the people who are praying behind him in congregational prayer.

These clarifications and highlights are vital in order that prayer is performed in a perfect way that frees one’s liability and makes one gain its full reward, because many people violate the instructions regarding the manner in which to perform the prayers. The following are some such matters found in Al-Bukhari and Muslim.

2. Using what causes a nasty smell that people despise such as cigarettes, hookah (shisha) which are worse than leek, garlic or onion. Angels and people who are praying are harmed by such nasty smells. Those going to attend a congregational prayer should go to the mosque with a fresh smell and purify themselves from these bad items.
3. Not raising the hands at the takbirat al-Ihram (the initial ‘Allahu Akbar) or at performing bowing or after rising from it and after standing up after performing the first Tashahhud (the first supplication said when sitting), which are all from the recommended acts of prayer. Also, raising the hands when performing takbir at the Funeral Prayer, the ‘Eid and the Istisqa’ (rain-seeking) prayers.
4. Many imams do not say the opening supplication in the prayer, or seek refuge with Allah from the devil or recite the Basmalah (i.e., ‘Bismillahi-Rahmani-Rahim’), or they might not recite it in the second rak‘ah (unit) and the rak‘ahs that follow, whereas all these matters are among the preferred acts in prayers.

5. Some late-joiners perform takbir while performing bowing when they come while the imam is performing bowing. In principle, however, takbirat al-Ihram should be done while standing and then be followed by bowing. If one hastens and leaves this takbir for bowing, his prayer would nonetheless be valid and the imam’s initial takbirat al-Ihram (which he missed) will suffice him.

6. Some people raise their eyes towards the sky while praying or look to the left or right, which causes forgetfulness or self-whispering. People are ordered instead to lower their gaze and look at their place of prostration.

7. Some people move a lot while praying and do things such as interlocking their fingers, cleaning their nails, constantly moving their legs, adjusting their headbands, looking at their watch, button up, and so forth. These movements nullify the prayer or at least lessen its reward.

8. Some precede the imam, move simultaneously with him or lag far behind him when performing prostration or bowing.

10. Some curve the back or hang the head down while performing bowing. It is reported that Muslims are forbidden from curving their backs, rather the back should be bent with the spine being at a right angle to the body (as far as possible) while performing bowing with the head being aligned and neither raised nor lowered with respect to the head.

12. Some do not perform tajafi during prostration. Tajafi means keeping the abdomen away from the thighs and the shoulders away from the sides as much as possible. The praying person should not annoy the people who pray beside him and should raise his arms away from the ground and put his palms parallel to his shoulders not his knees. The person should not exaggerate in performing tajafi by stretching his body as if he is lying on his abdomen to the extent that his head may reach the row that is ahead of him.

13. Many imams shorten the pillars of the prayers to the extent that the people praying behind them cannot catch up with them or say the obligatory dhikr (remembrance of Allah). This contradicts the tranquility that the Prophet asked us to apply in prayers. The imam should keep himself in the position of bowing or prostration for a period of time that would allow the people who are praying behind him to glorify Allah three times slowly and carefully and not quickly or hastily.

14. Some perform the tawarruk (a seated position where the left leg is under the right shin) in the two-rak‘ah prayers such as the Fajr, the Friday or the voluntary prayers, while not performing it in the four-rak‘ah or three-rak‘ah prayers during the last tashahhud. It is permissible to either perform tawarruk or not to perform it, but it is better to apply the Sunnah of the Prophet. The Sunnah is to perform tawarruk during the last tashahhud of the three-rak‘ah or four-rak‘ah prayer provided that the person will not annoy those who are beside him.

15. Constant moving of the index finger or any other finger during tashahhud. This finger should be moved only once or twice when the Shahadah (the testimony of faith) or the name of Allah is mentioned, and so forth.

16. Some move their two palms when ending the prayer towards the right and the left. The Companions (may Allah be pleased with them) would do this and the Prophet said: “Why do I see you raising your hands like the tails of the horses?” Thus, they quit doing this and turned their heads only”. (Abu Dawud and An-Nasa’i)

17. Many people do not wear clothing that covers the body properly, but instead wear insufficient trousers and shirts such that when they perform bowing, the shirt moves and part of their back and buttocks get exposed and people who pray behind them see it. The exposure of any part of the ‘awrah (part of the body that must be covered) nullifies the prayer.

18. Many people, immediately after finishing the obligatory prayers, shake hands with the people next to them and say, “may Allah accept our and your prayer,” or, “may you get to pray at Al-Bayt Al-Haraam (in Makkah)!” This is a religious innovation as it was not reported that the righteous predecessors did this.

19. Some people get up directly after ending the prayer without saying the supplications approved by the Shari`ah such as those glorifying Allah and praising Him and so forth. Sheikh Ibn Baz (may Allah have mercy upon him) wrote a short treatise regarding the adhkar that should be said after the obligatory prayers which is very beneficial and which the reader may wish to consult.

What Is the Ruling of the Prayer of One Who Drinks Alcohol?

Neglecting Prayer in Masjid Out of Fear of Coronavirus

Staying with a Husband Who Doesn’t Pray: Allowed?

Can a Menstruating Woman Enter the Masjid?