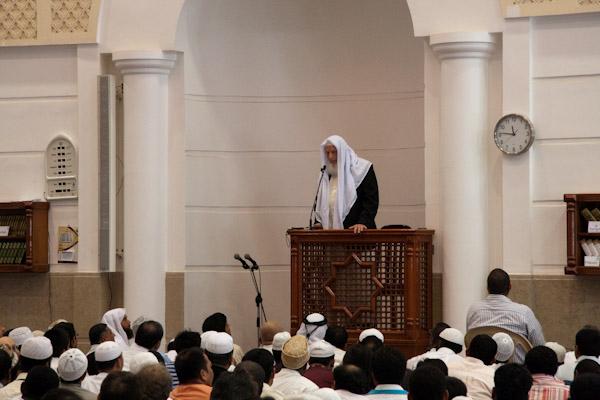 One of the most important aspects of worship performed on Friday is the deliverance of Khutbah (sermon).

The Friday Prayer is one of the distinct symbols that distinguishes the religion of Islam from other religions. The Almighty Allah has blessed Muslims with this grant as a day of congregational worship. One of the most important aspects of worship performed on that day is the deliverance of Friday Khutbah (sermon). Here are some etiquettes and conditions concerning it:

The majority of the people of knowledge are of the opinion that Friday Sermon is obligatory and they support this by an authentic hadith which state that the Prophet (peace be upon him) always made the khutbah with the Jumu`ah.

they also quote the saying of the Prophet: “Pray as you have seen me pray,” and the Qur’anic verse:

O you who believe, when the call is proclaimed for salat Al-jumu`ah, hasten unto the remembrance of Allah… ( Al-Jumu`ah 62:9)

This verse contains an order to hasten unto the remembrance, which implies that it is obligatory, and (the scholars) interpret the remembrance of Allah to include the khutbah.

Ash-Shawkani (may Allah have mercy upon him) refutes the first argument by saying that hadith simply states the action of the Prophet (peace be upon him) and does not necessarily prove that such an action is obligatory. As to the verse, he regards it as simply a command to be present at the prayer which is obligatory and excludes khutbah… Regarding their argument relating to the commandment to “hasten unto the remembrance of Allah,” he says it refers to prayer only, which is the real cause for making haste.

There is, however, an agreement that the Friday Prayer is obligatory while there is a dispute over whether or not the khutbah is obligatory. Ash-Shaukani concludes by saying that apparently the correct view is the one held by al-Hassan Al-Basri, Dawud az-Zahiri and al-Juwaini that the khutbah is only a highly recommended act.

The Greeting of the Imam:

Jabir (may Allah be pleased with him) reports that when the Prophet (peace be upon him) mounted the pulpit, he would greet the people. (Ibn Majah)

`Ata’ and others also reported in a mursal form that when the Prophet walked to the top of the pulpit, he would turn to the people and say: “Peace be upon you.” According to Ash-Sha’bii: “Abu Bakr and `Umar (may Allah be pleased with them) used to do that [also].”

As-Sa’ib ibn Yazid informs: “The first adhan to prayer made on the day of Friday was made when the imam sat upon the pulpit during the time of the Prophet, Abu Bakr, and `Umar. Then, during the time of `Uthman, since there were many people, he instituted a third adhan outside the mosque. The Prophet only had one muezzin.” ( Al-Bukhari and Abu Dawud)

Contents of the Khutbah:

It is preferred that the Friday khutbah include praises of Allah, the Exalted, prayers upon the Prophet, admonitions, and Qur’anic recitations.

Abu Hurairah reports that the Prophet (peace be upon him) said: “Every speech that does not begin with the praises of Allah is defective.” (Abu Dawud)

In another version, it is stated: “The Friday khutbah that does not contain the testimony [“There is no God except Allah, and Muhammad is His Messenger] is like the defective hand.” ( Ahmad, Abu Dawud, and At-Tirmidhi)

Jabir ibn Samurah says: “The Messenger of Allah would deliver his khutbah standing, would sit in between the two khutbahs, would recite some verses, and would remind the people [about Allah].” (Muslim)

Jabir also related that the Prophet (peace be upon him) would not make his admonitions on Friday too long, but give a very short khutbah. (Abu Dawud)

Ibn Majah records from Ubay that the Messenger of Allah recited: “Blessed is He…” (Surat Al-Mulk) on Friday while he was standing. In Ar-Rawdah An-Nadiyah, it is stated: “Thus the required khutbah, in terms of Islamic law, should be modeled after the Prophet’s khutbah exhorting people to do good and warning them against dire consequences of the evil. This is the spirit of the address which the Islamic law has instituted. As to the other contents of the khutbah, like praising Allah, saying prayers upon His Messengers or reciting a portion of the Qur’an, none of these is its main purpose, which is to admonish people.

It has been customary among the Muslims [in the light of the Sunnah] that if one wanted to make some sort of proclamation, he would begin with praises of Allah and prayers upon His Prophet, or something of that nature. Still, that is not the purpose of the khutbah; indeed, the purpose is that which is said after praises of Allah and prayers for the prophet. If a person delivers a khutbah and confines it to only praising Allah and saying prayers upon the Prophet, his khutbah would hardly be acceptable. Any person with common sense could understand that.

Posture during and between the khutbahs:

It is proper for the imam to stand for the two khutbas and to sit for a short while in between them. Ibn `Umar said: “When the Prophet (peace be upon him) would deliver the Khutbah, he did so standing, and then he would sit, and then he would stand [again, for the second khutbah] as the people do today.” (Agreed upon)

It is preferred to raise one’s voice, to keep the khutbah short, and to the point:

Ammar ibn Yasir (may Allah be pleased with him) reports that he heard the Messenger of Allah say: “Prolonging prayer and shortening one’s khutbah is a sign of one’s understanding of the religion. So, prolong the prayer and shorten the khutbah.” (Ahmad and Muslim)

Shortening the khutbah and prolonging one’s prayer shows one’s understanding of religion, for such a person is able to comprehend and express much in a few words.

Jabir informs: “When the Prophet delivered the khutbah, his eyes became red, his voice rose, and his anger increased as if giving a warning to the enemy.” (Muslim and Ibn Majah)

An-Nawawi says: “It is preferred for the khutbah to be in an eloquent and proper Arabic, and it should be an organized speech that the people can understand. It should not be a speech, which is over the heads of the people, nor should it be shallow or contain foul language as that would defeat its purpose. Its words should be chosen carefully to make them attractive and meaningful.”

The Imam Interrupting his Khutbah for some Reason:

Abu Hurairah reports: “The Prophet was delivering a khutbah and Al-Hassan and Al-Hussayn [his grandsons] came and they were wearing two red shirts and they were tripping while walking. The Prophet came down from the pulpit and picked them up and placed them in front of himself, and then he said: ‘Allah and His Messenger have told the truth. Verily, your wealth and children are a trial. I looked to these two children walking and tripping, and I could not be patient, so I cut off my khutbah and went to pick them up.”‘ (Agreed upon)

Abu Rifa`ah Al-`Adawi says: “I went to the Prophet while he was delivering a khutbah, and I said: ‘O Messenger of Allah, this strange man has come to ask about his religion as he does not know what his religion is.’ The Prophet turned to me and left his speech, he came to me and he was given a wooden chair with four iron legs, and he started to teach me what Allah had taught him and then he went back to complete his khutbah.” ( Muslim and An-Nasa’i)

It is Forbidden to Speak during the Khutbah:

The majority of the scholars are of the opinion that it is obligatory to be silent during the khutbah, and one is not to indulge in conversation during the khutbah, not even if it is to order one to do some good or to stop some evil, and this rule applies whether or not the person sitting in the mosque can actually hear the khutbah.

Abu Hurairah reports that the Prophet (peace be upon him) said: “If, during the Jumu`ah while the imam is delivering khutbah, you tell your companion to be quiet, then you have spoken needlessly.” (Agreed upon)

Abu Ad-Darda’ says: “The Prophet was upon the pulpit and was addressing the people and he recited a verse, and next to me was Ubay ibn-Ka`b and I asked him: When was that verse revealed?’ He refused to talk to me until the Messenger of Allah came down from the pulpit and then he said to me: ‘You have nothing from your Jumu`ah, except your useless talk.’ When the Prophet had finished, I went to him and informed him of what had happened, and he said: ‘Ubay has told the truth. If you hear your imam speaking, be quiet until he is finished.”’ (Ahmad and At-Tabarani)

At-Tirmidhi records that Ahmad and Ishaq made an exception for replying to a salutation and responding to a sneeze while the imam is delivering the Friday khutbah. According to Ash-Shafi`i: “If a person sneezes [during the khutbah] and someone says: ‘May Allah bless you,’ I wish I could have accommodated it since such a reply is a sunnah. In my view it is disliked that a person should greet someone with salam [while they are listening to the khutbah]. [What makes it worse is] that his salam is not returned, even though saying salam is a sunnah while responding to it is obligatory.

Indulging in Conversation when the Khutbah is not being Delivered, is Permissible:

Tha`labah ibn Abi-Malik says: “We would be talking on Jumu`ah while `Umar was sitting on the pulpit and when the call to prayer was finished `Umar would stand and no one would utter a word until he had completely finished both of his khutbahs. When the iqamah was made and `Umar came down from the pulpit, the people would then speak.” (Ahmad)

One thought on “Friday Khutbah (sermon)”

Masha Allah. It is really inspiring to read such post. Islam has concerned many such lucky persons. Islam means peace, peace from Allah and peace in this life and in hereafter.