Conditions of Prayer: Facing the Qiblah 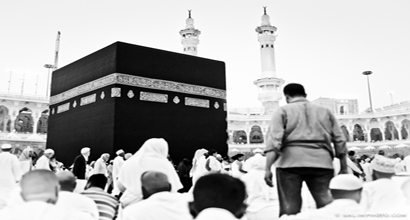 Facing the Qiblah (direction of prayer) is one of the conditions for the validity of prayer.

So turn your face toward al-Masjid al-Haram. And wherever you [believers] are, turn your faces toward it [in prayer]. (Al-Baqarah 2:144)

Al-Bara` ibn `Azib (may Allah be pleased with him) said, “We offered prayer with the Messenger of Allah (peace be upon him) for about sixteen or seventeen months towards Jerusalem, after which time he turned towards the Ka`bah.” (Muslim)

When One Realizes that he was not Facing the Qiblah:

If that deviation was so slight to the extent that does not invalidate the prayer, then his prayer is valid and does not have to perform it again. Abu Hurayrah ( may Allah be pleased with him) reported that the Prophet (peace be upon him) said, “ The Qiblah is between the east and the west.” (At-Tirmidhi)

Sheikh Ibn `Uthaymin (may Allah have mercy upon him) said, “The matter is broad in scope, so if someone offered prayer slightly away from the qiblah, that does not matter, as he is facing the general direction.” (Ash-Sharh Al-Mumti`)

If that deviation was great to the extent that the direction of the qiblah is behind him or on his left or right then:

1- If a worshiper has done his best and tried to find out the right direction of the qiblah, he does not have to repeat it according to the majority of scholars.

“If a worshiper tries to find out the qiblah and offers prayer, then he finds out that his estimation was wrong, his prayer is still valid.” (Fatawa Al-Lajnah Ad-Da’imah)

2- In case the worshiper does not do his best and try to find the out the right direction of the qiblah, he has to repeat his prayer. Sheikh Ibn `Uthaimin said, “If he offers the prayer without trying to find out the qiblah and without following someone, if he gets it wrong he has to repeat it. (Ash-Sharh Al-Mumti`)

There are two cases in which the worshiper does not have to face the Qiblah:

1- When offering voluntary prayers while riding an animal, car and son on. The rider may bend his head slightly for the bowings and prostrations of the prayer, but he should bend a little bit lower for the prostrations. He may face in whatever direction his ride is going.  `Amr ibn Rabi`ah (may Allah be pleased with him) reported, “I saw the Messenger of Allah (peace be upon him) pray while riding, and he faced the direction in which he was going.” (Al-Bukhari and Muslim)

2- Offering prayer while having to deal with forced conditions, illness and fear. Under such circumstances, it is allowed to offer pray without facing the qiblah. Almighty Allah says:

Ibn `Umar (may Allah be pleased with him) added, “Facing the qiblah or not facing it.” (Al-Bukhari)

What Is the Ruling of the Prayer of One Who Drinks Alcohol?

Neglecting Prayer in Masjid Out of Fear of Coronavirus

Staying with a Husband Who Doesn’t Pray: Allowed?

Can a Menstruating Woman Enter the Masjid?