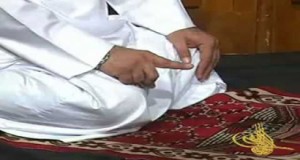 If the Prophet was saying the first tashahhud, he would get up for the third rak’ah with takbir.

If the Prophet (peace be upon him) was saying the first tashahhud, he would get up for the third rak’ah with takbir (saying Allahu Akbar). (Al-Bukhari and Muslim)

If he was at the last tashahhud, he would then say:

A closer look at the meanings:

Send prayers on Muhammad: You are asking Allah to exalt him and raise his rank, as noted by Ibn Hajar.

Send blessings on Muhammad: You are asking Allah to increase blessings for the Prophet, meaning to give the Prophet the good which Allah granted to Ibrahim (as) as well as its multiplying and increase.

The Prophet (peace be upon him) told us about the virtues of passing salams on him. He has said:

“If anyone of my community says one prayer on me, Allah blesses him ten times, ten good actions are written down for him and ten bad actions are effaced from him.” (An-Nasa’i)

After sending prayers on the Prophet:

Notice how the tashahhud follows the same sequence of the etiquette of getting our supplications answered: praising Allah, passing peace and blessings on His Prophet, and then we are given the opportunity to make du`aa’, which the Prophet has told us Allah will answer in sha’Allah.

He then told us what to say: “When one of you has finished the [last] tashahhud, he should seek refuge with Allah from four things saying:

If we have just met with someone, and are departing, we ask “Do you want anything from me?” Allah’s Mercy is infinitely more bountiful. At the end of our brief meeting, it is as though He is telling us “Is there anything else you want?” by granting us this final du`aa’.

Next, the Prophet (peace be upon him) would salute to his right saying:

“May Peace and Allah’s Mercy be on you and he would turn to his left and say the same.” (At-Tirmidhi)

But there is something we should be wary of, and this was something the Prophet feared for us too. He said:

“If you did not sin, I would have feared for you what is greater; and that is self-admiration.” (Al-Bayhaqi)

Meaning, now that we have improved our prayer in sha’Allah and have a heightened khushu`, we should not regard ourselves as better than others. Ibn Al-Qayim has said that self-admiration even invalidates our acts! We should remember all of those past prayers that we prayed badly, and know that whatever good we are able to do, it is from Allah, as He has said in the Qur’an:

And all this that we have said, is not even a drop in the ocean in relation to the secrets and pleasures of prayer.

May we put into practice all that we learned, and regard each prayer as a sacred, beautiful meeting with Allah.