Common Mistakes Made during Jumu`ah 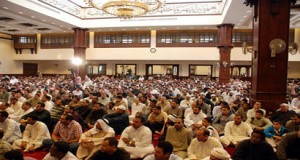 The Prophet (peace be upon him) said: “The best prayer in the sight of Allah is the congregational Fajr prayer on Friday.”

Many of us go to the mosque on Friday as a matter of tradition and habit, without making the intention of worship, whereas an intention is a precondition for the Jumu`ah prayer and all other acts of worship.

Increasingly, we see people staying up late, which causes them to miss Down (Fajr) prayer, leaving them to start their day having committed a great major sin, while the Prophet (peace be upon him) said: “The best prayer in the sight of Allah is the congregational Fajr prayer on Friday.” (Graded as Sahih by Al-Albani)

People might commit mistakes out of ignorance or negligence, among which are the following:

1. Slighting the attendance of the Jumu`ah sermon (khutbah); some people arrive during the sermon and others arrive while people are praying.

4. Shopping or engaging in trade after the Adhan (call for prayer) has been called for the Jumu`ah sermon, while Allah the Almighty says:

O you who believe (Muslims)! When the call is proclaimed for the Salat (prayer) on Friday (Jumu`ah prayer), come to the remembrance of Allah [Jumu`ah religious talk (Khutbah) and Salat (prayer)] and leave off business (and every other thing). That is better for you if you did but know. (Al-Jumu`ah 62:9)

Ibn `Abbas (may Allah be pleased with him) said, “It is forbidden to buy or sell at that time.”

5. Some people commit certain sins while thinking they doing something praiseworthy, such as those who shave their beards on Friday because it looks “cleaner “.

6. Sitting in the courtyard of the mosque while there is space for inside.

7. Making people move and sitting in their place. Jabir(may Allah be pleased with him) narrated that the Prophet (peace be upon him) said: “Let no one move his brother on the day of Jumu’ah and sit in his place, instead he should say: ‘make space.'”(Muslim)

10. Leaving the mosque after the adhan has been called without a valid excuse.

11. Not paying attention to what the Khatib is saying during the sermon.

12. Praying two rak`ahs (units of prayer) between the two sermons, whereas the Sunnah is to supplicate and seek forgiveness until the imam stands up to deliver the second sermon.

13. Unnecessary movements during prayer, hastening to leave the mosque immediately after praying and pushing people at the door to leave without finishing the prescribed supplications after praying.

1. Making the sermon long and shortening the prayer.

`Ammar (may Allah be pleased with him) narrated that he heard the Prophet saying: “The lengthening of the prayer (by the imam) and the shortness of the khutbah (sermon) is the sign of his understanding (of faith), so prolong your prayers and shorten your speech; indeed some khutbahs have the effect of magic (i.e., they are very powerful).” (Muslim)

2. Not being well prepared for the sermon and not choosing the correct topic that addresses people’s concerns.

3. Having numerous linguistic errors in the khutbah.

4. Using narrations that are weak or fabricated, and quoting disliked opinions without denouncing them.

5. Limiting the second sermon to contain supplications only.

6. Not using any verses from the Qur’an during the sermon, which opposes the Sunnah.

7. Failing to deliver a stirring sermon, while it is reported by Jabir when he described the Prophet (peace be upon him), he said, “Whenever the Prophet used to deliver the Jumu`ah sermon, he would raise his voice; his eyes would become red and he would become excited as though he was warning people against a conquering army which was just about to attack them.” (Muslim)