The Earth is My Masjid 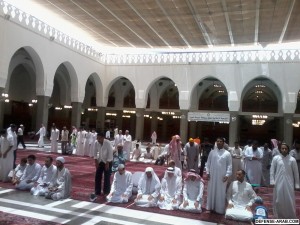 The master of mankind continued on his way with renewed enthusiasm and excitement that he got from Quba.

Three kilometers from Madinah in a field used for drying dates, he is leading the prayer with the congregation praying in rows behind him in a haphazardly enclosed structure nailed to the floor. Captured in silence, the crowd beseeches its Lord via the moving lips of this man whose face is turned towards Jerusalem. The pleas transcend the boundaries of this masjid and cover the whole sky.

Breaking the chain of slavery put on the neck of his race, he is now performing the duty of imam to a congregation that includes Islam’s prominent personalities like Abu Bakr, `Umar, Abu Salamah and Zayd.

The first, favorite companion who declared his faith to the Prophet Muhammad (peace be upon him) is in the back, and the freed slave Salim is in the front. With humility they are paying homage to their Lord, who is the reason for this wonderful gathering in this simple masjid.

With this blessed duty, Salim gets the honor of being ‘the first imam of the first Islamic mosque’.” For Quba was the last stopping place during the Prophet’s migration to Madinah and a small village that gave the new religion its first permanent masjid during this short stop. It is a blessed place where the Messenger of Allah read the first Friday sermon to Muslims among the smells of mortar and dried dates, and led the first Friday Prayer.

The master of mankind continued on his way with renewed enthusiasm and excitement that he got from Quba’. The Prophet enters Madinah not as a humbled, resentful person who has been run out of Makkah and forced to hide in caves, but, with the support of the large community that met him in Quba’, he enters as a savior, commander and head of state.

Even though it prepared the foundation for this transformation, the Quba’ Masjid cannot accompany the Prophet, but instead remains behind. The construction of a new masjid in Madinah, Al-Masjid An-Nabawi begins. Before long this masjid turns into a place where Muslims not only come together for prayer, but also a center where Muslims talk together, share their joys and sorrows, and important decisions are made by the new government.

However, the Prophet of mercy to the worlds never forgets Quba’; he continues to visit at regular intervals the place he describes as:

There is a story that reminds us that every masjid on earth goes back to Quba’, or of the first masjid where the Prophet breathed and of the blessed sweat of his brow as he put the rock of the first masjid under the pole. In the Al-Qiblatain Masjid where the verse regarding the change in qiblah (direction of the Ka`bah) was revealed, this story of the Prophet is hidden in the two qiblahs of the masjid.

Muslims inspired by the words of the beloved of lovers: ”The world is a clean masjid for me”, crowned every corner in the world with a masjid and wrote the stories of these masjids that extend back in time to Quba’.

On a line extending from the Prophet’s death to today, the masjid has created an atmosphere that invites us into the Prophet’s life. The multiple rewards for salah performed with a congregation and for each step taken towards a mosque were carried over to masjids with the hadith: “A believer in the mosque is like a sun shining in water”.

So much so that the space and shape of traditional Islamic cities are, in a sense, an extension of the masjid. Cities and towns were invited to unity by means of the adhan calling from minarets; neighborhoods were bathed by the doleful sound of the adhans spreading out wave by wave. Like light houses showing the way to ships struggling against the turbulent waves, minarets shed light on the city streets for those who were spiritually lost.

According to Nasr, the masjid has always been a reflection and summary of the harmony, order and peace in nature. While the word ‘masjid’ means a place of prostration or bowing down, it has symbolized surrender to Allah and bowing before Him.

At the same time meaning the moment the forehead meets the ground, the word sajdah has symbolized a return to essence and communion with the earth and nature. Thus, the spirit of nature was reflected in the Muslim’s house of worship. Returning to the bosom of nature while praying, a believer found an opportunity to attain silence in this sacred space. Viewing nature as a place of worship for Muslims, the words of the Prophet made the masjid an extension of nature.

However, masjids were not just presented to Muslims as a place where they could worship and find peace. The architecture of traditional Islamic cities always shows a place of worship-centered structure. The city grows up around this structure. It is like the city ‘is covered with a single roof emerging from a sacred center’.

Even in the center of life, Islamic places of worship are surrounded by nature’s harmony, balance and congruity. In this way it prevented the place where Muslims worshipped from being cut off from changing daily life. At the same time it surrendered life’s most active point to a structure where a natural peace reigned and which constantly reminded daily life of this tranquility.

In the words of the sagacious Turkish architect Turgut Cansever, the Islamic masjid is the most obvious and vital expression of ‘action in tranquility’. The masjid is a place where the Prophet’s breath is breathed, where you can find a remembrance from him in some corner, and where the center of the city and life is located.

One thought on “The Earth is My Masjid”

This is a beautiful article, jazak Allah khayr.