The Sun Will Indicate the Qiblah 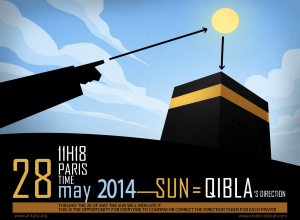 This direction of prayer is called the qiblah. Wednesday the 28th of May, the sun will be right above the Ka`bah.

It should be noted that, Muslims had been facing the direction of Jerusalem (Al-Aqsa Mosque) while offering their prayer. This practice was followed for one year and four months after migrating to Madinah. After that the Qiblah for the prayer was changed to the Ka`bah in response to the divine command,

We have certainly seen the turning of your face, [O Muhammad], toward the heaven, and We will surely turn you to a qiblah with which you will be pleased. So turn your face toward al-Masjid al-Haram. And wherever you [believers] are, turn your faces toward it [in prayer]. Indeed, those who have been given the Scripture well know that it is the truth from their Lord. And Allah is not unaware of what they do. (Al-Baqarah 2:144)

It is important to note that the Muslims do not worship the Ka`bah. In Islam, every single act of worship must be directed to Allah alone, and the greatest sin in Islam is to direct even the tiniest part of worship to other than Allah. It is not allowed for a Muslim to have any kind of intermediary with Allah in worship, whether a living being, or an inanimate object. Muslims pray to Almighty Allah alone, and they do not take things either as direct objects of worship, or indirect objects of worship through which Allah’s help is sought.

The Ka`bah is actually a mosque – a Muslim place of worship, much like Christians have churches and Jews have synagogues. It was the first building on earth dedicated to the worship of Allah alone. It is just a symbol of the unity of Muslims in worship.

The Sun above the Ka`bah

This direction of prayer is called the qiblah. Wednesday the 28th of May, the sun will be right above the Ka`bah.

At every moment, the Sun runs above our heads. So that it would be possible to establish a path and even a virtual route on land, as if traveling on. The Sun’s position is such as it systematically corresponds to a geographically localized place on earth. Imagine that the Sun is a ball whose shadow is cast on the ground. Well, we could draw the path taken by the shadow and locate, depending on the time of day, some places on earth simply by looking at the Sun, provided that these places are located between the two tropics, as it is the case for Makkah. This is particularly interesting for Muslims.

Both Dates to remind are May 28th and July 16th of each year. On these dates, the Sun is actually above Mecca, and more precisely above the Ka`bah. On May 28th, the sun will be at this position at 9:18 am GMT.

The time in USA would be:

A month and a half later, the Sun always returns precisely above the Ka`bah, on July 16th, at 9:27 am GMT. In order to know the time of the country you live in regarding to GMT, you can visit this website: http://www.wwp.greenwichmeantime.com/