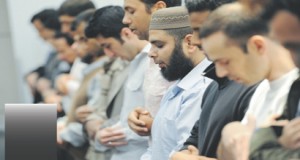 Commence Prayer with the Words of the Greatness, that is, “Allah is the Greatest”.

Having fulfilled all the conditions for purification and having covered the private parts, the time for Prayer has arrived, stand with your eyes facing towards the Ka`bahand your heart facing towards Allah. Dedicate your intentions and actions to Him and resolve upon Prayer to Him. Prepare your heart and let your soul be in fear of the Lord, for you are about to stand before the Master of Heaven and Earth. Call to your mind the Majesty and Glory of Allah. In the measure you call Him to mind, in such measure will be your consciousness of Allah. Then do the following:

1– Commence Prayer with the Words of the Greatness, that is, “Allah is the Greatest”, while at the same time raising the open hands and placing the thumbs behind the lobes of the ears.

2- Then place the right hand over the left and put them together on your chest.

a. The First Supplication

‘Subhanaka Allaahumma wa bihamdika tabaraka-smuka wa ta’ala jadduka wa la ilaha ghairuk.’ “Praise and Glory be to Allah. Blessed be Your Name, Exalted be Your Majesty and Glory. There is no god but You.”

b. The Second Supplication

“I turn my face to Him Who has created heaven and earth, a true believer and a Muslim, not one of the polytheists. My Prayer and my rites, my living and my dying belong to Allah, Lord of the worlds, Who has no partner. Therefore am I commanded and therefore do I submit.” We will content ourselves with this portion of the supplication. The Prophet (peace be upon him) used to recite it at the voluntary Night Prayer only, but the hadith in full (as related by Imam Ahmad and Muslim) concludes:

“O Lord, You are the King. There is no god but You. You are my Master and I am Your bondman. I have wronged myself. I acknowledge my sins. May You forgive all my sins. Only You can forgive sins. Guide me to the finest moral character. Only You can guide to the best. Turn away an evil nature. Only You can turn away from me its evil. I obey You and rejoice in You. All prosperity is in Your hands and there can be no evil in You. I am Yours and belong to You. You are Blessed and Exalted. I seek Your forgiveness and turn to You in repentance.”

4- Having said the Opening supplication, seek protection of Allah before beginning the recitation of the Qur’an.

“I seek the protection of Allah from the accursed Satan.

” This is to be said only at the start of the first rak`ah (units of prayer).

“In the Name of Allah, the Compassionate, the Merciful”  which should also be said after seeking Allah’s protection from Satan. 5- Then recite the Opening Chapter (Surah) of the Qur’an reflecting and pondering on its meaning.

It is according to the Sunnah that each person performs Prayer, be he an Imam, a follower to an Imam (leader of prayer) or by himself, to say “Ameen” immediately after reciting this chapter. Say it aloud where the Prayer is said aloud and whisper it when the Prayer is said quietly. The mosques used to shake and resound to the cry of “Ameen” coming from the throats and hearts of the devout bondmen of Allah. “Ameen” is itself a Prayer which means “0 Lord, answer my supplication.”