Prayer: The Islamic Form of Association 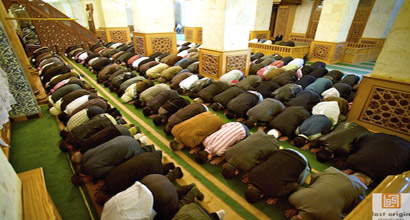 The Islamic form of association in prayer is indicative of the aspiration to realize this essential unity of mankind as a fact in life.

The real object of prayer is better achieved when the act of prayer becomes congregational. The spirit of all true prayer is social. Even the hermit abandons the society of men in the hope of finding, in a solitary abode, the fellowship of God.

A congregation is an association of men who, animated by the same aspiration, concentrate themselves on a single object and open up their inner selves to the working of a single impulse. It is a psychological truth that association multiplies the normal man’s power of perception, deepens his emotion, and dynamites his will to a degree unknown to him in the privacy of his individuality.

Indeed, regarded as a psychological phenomenon, prayer is still a mystery; for psychology has not yet discovered the laws relating to the enhancement of human sensibility in a state of association.

With Islam, however, this socialization of spiritual illumination through associative prayer is a special point of interest. As we pass from the daily congregational prayer to the annual ceremony round the central mosque of Makkah, you can easily see how the Islamic institution of worship gradually enlarges the sphere of human association.

Prayer, then, whether individual or associative, is an expression of man’s inner yearning for a response in the awful silence of the universe. It is a unique process of discovery whereby the searching ego affirms itself in the very moment of self-negation, and thus discovers its own worth and justification as a dynamic factor in the life of the universe.

True to the psychology of mental attitude in prayer, the form of worship in Islam symbolizes both affirmation and negation. Yet, in view of the fact borne out by the experience of the race that prayer, as an inner act, has found expression in a variety of forms, the Qur’an says:

To every people have We appointed ways of worship which they observe. Therefore let them not dispute this matter with you, but bid them to your Lord for you are on the right way: but if they debate with you, then say: God best knows what you do! He will judge between you on the Day of Resurrection, as to the matters wherein you differ. (Al-Hajj 22:67-69)

The form of prayer ought not to become a matter of dispute. Which side you turn your face is certainly not essential to the spirit of prayer. The Qur’an is perfectly clear on this point:

The East and West is God’s: therefore whichever way you turn, there is the face of God. (Al-Baqarah 2:115)

There is no piety in turning your faces towards the East or the West, but he is pious who believes in God, and the Last Day, and the angels, and the scriptures, and the prophets; who for the love of God disburses his wealth to his kindred, and to the orphans, and the needy, and the wayfarer, and those who ask, and for ransoming; who observes prayer, and pays the legal alms, and who is of those who are faithful to their engagements when they have engaged in them; and patient under ills and hardships, in time of trouble: those are they who are just, and those are they who fear the Lord. (Al-Baqarah 2:177)

Yet we cannot ignore the important consideration that the posture of the body is a real factor in determining the attitude of the mind. The choice of one particular direction in Islamic worship is meant to secure the unity of feeling in the congregation, and its form in general creates and fosters the sense of social equality inasmuch as it tends to destroy the feeling of rank or race superiority in the worshippers.

What a tremendous spiritual revolution will take place, practically in no time, if the proud aristocratic Brahmin of South India is daily made to stand shoulder to shoulder with the untouchable!

From the unity of the all-inclusive Ego who creates and sustains all egos follows the essentialunity of all mankind. The division of mankind into races, nations, and tribes, according to the Qur’an, is for purposes of identification only.

The Islamic form of association in prayer, therefore, besides its cognitive value, is further indicative of the aspiration to realize this essential unity of mankind as a fact in life bydemolishing all barriers which stand between man and man.

The article is excerpted from the author’s book “The Reconstruction of Religious Thought in Islam”.