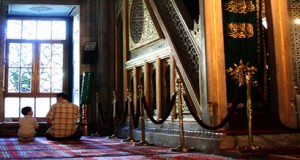 The parent/father should accompany his child to the mosque to attend the Friday and `Eid prayer at an early age.

In part one we learned a little about the importance of teaching children how to pray in light of the Prophet`s guidance.

In this part we continue learning more about how to make the child`s heart attached to prayer.

Accompany your child to the mosque

When your child is able to perform prayer as due, or even is able to comprehend prayer before reaching the age of distinction, you should accompany him to the mosque so as to perform congregational prayers. This makes the child`s heart attached to the greatest educational institutions in the Muslim society, imbuing the child with love for the mosque.

Thus, the parent should edify his child on the virtue of the congregational prayer and that it is twenty-seven times better than the prayers offered alone, and make him love the mosque by trying to please him, for example, whenever you go to the mosque; you may take a trip or go shopping before or after going to the mosque.

Furthermore, the parent/father should tell some of his fellows in the mosque that he will bring his child that day so that they would warmly welcome him and play with him and thus, the child would love coming to the mosque and love the people there as well.

Moreover, the parent/father should steer away from accompanying his child to the mosques that might estrange or alienate him, such as constricted and badly-ventilated ones where the temperature might get uncomfortably high, or mosques where elderly people pray since they usually scold young children [who might disturb them] during prayer, or the mosque where the imam prolongs the prayers; because showing thoughtfulness and consideration to children while performing prayers is of great significance. In fact, it is a command of the Prophet (peace be upon him) as he said: “O people, there are ones among you who cause people to be averse (to come to the mosque). If anyone of you leads the people in prayer, he should shorten it for amongst them are the weak, the old and the one who has a need (to fulfill).”

In another narration with a different wording: “…for amongst them are the old, the young and the sick…” )Al-Bukhari and Muslim(

The parent should then resort to the best means to accustom his child to performing the congregational prayer imbuing him with love for it; he might let the son lead his brothers, his mother, or his sisters in some obligatory or voluntary prayers such as the tarawih prayer (offered during Ramadan). In fact, this would make the child feel more respectable and well-balanced, would urge him to adhere to performing the prayers and encourage him to be a better person.

The parent/father should accompany his child to the mosque to attend the Friday and `Eid prayer at an early age and teach him how to perform ghusl (ritual bath), even though he is not obliged to perform it. He should also carry out other acts of worship that are due on these occasions before the child such as: reciting dhikr (remembrance of Allah), purification, applying perfume and dressing up to go to prayers.

Furthermore, the father should make the child feel the significance of that special day; he might tell him, “We will be attending a big celebration in which an honorable and respectable scholar will deliver a speech, and then we will perform the prayers”.

Hence, the child would be emotionally-charged, get used to seeing large gatherings, and highly revere and venerate the status of the imam of the mosque within his heart; as he sees him advising a large congregation and everyone listening attentively to his words. Thus, the child would see in him a role model to be followed. Indeed, the father should choose the suitable mosque where all these requirements are met and the Friday Khutbah (sermon) is effective.

The above set of instructions and guidelines should be followed by the parent or teacher in teaching the child to perform prayers until the child adheres to performing due prayers heart and soul, and recognizes prayer as the pillar of Islam; and accordingly, he would grow up to revere and venerate it highly.

Indeed, we do not wish to find this evil phenomenon of parents neglecting teaching their children to pray. We do not want to see the father who adheres to due prayers in the mosque, while his children and other members of his family are lax and negligent regarding performing prayers, or even abandon it entirely.

Undeniably, the father would be held accountable on the Day of Resurrection: ‘Why did you not teach your child to pray? Why did you wait until he reached that stage and abandoned performing prayers completely?’ Bear in mind, dear parent, that Allah the Exalted does not accept excuses after warnings; Allah the Almighty says what means:

O you who have believed, protect yourselves and your families from a Fire whose fuel is people and stones.(At-Tahrim  66:6)

Illuminated Signs on the Way

1. Dear parent, you should take into account the differences between children in terms of distinction and age.

2. It is better if the child performs the voluntary prayer collectively with his parents at first and raises his voice a little bit in prayer.

3. Some children may not be able to distinguish between the time when prayer is due and when it is missed; due to their inability to read the time on the clock and know the prayer times.

In that case, he should be trained to hasten to prayer as soon as he hears the Adhan (call for prayer), or he may be reminded of each prayer and should not be punished or reproved for missing a prayer of which he was not reminded. However, if he was reminded of a prayer but he ignored it out of laziness or carelessness or because he was watching TV or playing and thus, missed that prayer, he should be punished without excessive harshness so that the child would not be stubborn or reject performing prayer altogether.

Al-Jahizh reported that when `Uqbah ibn Abi Sufyan assigned an educator to discipline his son, he told him, “In order to rectify my child, you should first rectify yourself; since students look up to their educator and see through his own eyes. In fact, good for them is whatever their educator sees good and bad is whatever he considers to be bad. Furthermore, you should teach them the biographies of wise people who had refined manners. Moreover, you may threaten him and discipline him without asking for my permission. You should be their doctor who does not hasten to prescribe the medication until he knows the disease duly and thoroughly, and do not expect so much from me as a parent; for I have counted on you to parent my son.”