Mosque in Islam: An Integrated Role 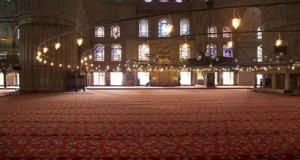 The role of the mosque, as far as Islam is concerned, goes beyond being a place for performing prayers. It plays crucial roles in different spheres of life.

The role of the mosque is not restricted to performing prayers, yet it plays significant social and political roles. For example, offering prayer in congregation in the mosque enhances unity among the praying persons. Also, in the mosque people meet each other, discuss their problems and try to find solutions to them.

(This lamp is found) in houses which Allah hath allowed to be exalted and that His name shall be remembered therein. Therein do offer praise to Him at morn and evening. (An-Nur 24:36)

Once entering the masjid, the Prophet (peace be upon him) found a man called Abu Umamah (may Allah be pleased with him) sitting, so he said: “Why are you sitting in the masjid though it is not a prayer time?” Abu ‘Umamah replied: “I am heavily in debt and overburdened with worries.” The Prophet replied: “Shall I teach you words that if you say them, all your worries will go away and your debts will be paid off?” He said: “Yes, Prophet of Allah.” He said: “Say in the morning and at night: ‘O Allah! I seek refuge in You from distress and sorrow, from helplessness and laziness, from miserliness and cowardice, from being heavily in debt and from being overcome by men.’” Abu Umamah said so and his debts were paid off and became free of worries and sadness. (Al-Bukhari)

This is an example of a man who was exposed to the hardships of life but instead of seeking help from a rich person he sought refuge in Allah who did not disappoint him.

The Prophet (peace be upon him) said: “The congregational prayer exceeds that of individual prayer by twenty seven degrees. Whoever performs ablution properly then goes to the mosque, every step that he takes erases one of his bad deeds and elevates him a degree (in Paradise). If he enters the mosque and starts praying, the angles will implore Allah to forgive him and have mercy on him saying: ‘O Allah! Have mercy on him and forgive him.’ And one remains (receiving an equal reward as if he is still) in prayer as long as he is awaiting (the coming) prayer.” (Muslim)

Muslims should go to the mosque day and night and should love being there. `Abdullah ibn Mas`ud (may Allah be pleased with him) says: “No one should miss the prayer at the mosque except the ill and the hypocrites.” He also added that the Prophet (peace be upon him) taught us the means to guidance and one of these means is praying at the mosque.

The majority of jurists are of the opinion that praying in congregation at the mosque is a stressed upon Sunnah.

Maybe they are the people referred to by Ibn `Abbas (may Allah be pleased with him) when he was asked about a person who fasts and stays up all night praying but does not go to Friday prayers at the mosque or join any congregational prayers. He said that he was among the people who will be cast in Hellfire.

The role of the mosque is not to amass people and make it crowded. It is meant to encourage people to interact with each other on a basis of love, cooperation and seeking Allah’s pleasure. Actually, every Muslim should try to reach such a level of harmony with others, and get rid of selfishness that isolates him from others. The Prophet (peace be upon him) said: “Allah supports those who unite, but those who split from the group will be cast in Hell-Fire.” (At-Tirmidhi)

One of the roles of the mosque is teaching Muslims discipline by standing in rows. Unfortunately, Muslims do not respect this in spite of the great stress that Islam makes on discipline and standing in rows in masjids. Ibn Mas`ud reported that the Prophet (peace be upon him) said: “Stand in line and stand shoulder to shoulder. Do not leave gaps for the devil to stand in. Whoever fills a gap in a line, Allah will reward him. And whoever breaks the line, Allah will turn away from him.” (Abu Dawud)

I have read that during the war in Persia, Muslim fighters were drinking in lines from a river. When one soldier dropped his cup in the river, the whole row would wait for him till he got it back then they all would move together again. So, they acted with the spirit of the group and were not fragmented. It is a shame to see Muslims nowadays fragmented and overwhelmed by selfish desires with everyone caring about his own interests, regardless of others. This selfishness would kill tens of people while performing the rituals of Hajj (pilgrimage to the Ka`bah). Thus, it seems that the masjids nowadays are not doing their role properly.

One of the roles of the masjid is to raise the cultural standard of people through two main ways:

First: contemplating on the meaning of the verses recited during prayers as well as listening to the Friday sermon (Khutbah). The Qur’an is a comprehensive Book that tackles tenets, rituals, morals laws, things pertaining to international and local affairs, and descriptions of the universe; and it tells us of past history just as it tells us about Allah and His attributes.

Actually, the Qur’an was the main source of knowledge for our predecessors because their mastery of language allowed them to derive everything from its verses. It is no wonder that those who listened to the Qur’an recited by the Prophet (peace be upon him) attained the highest degree of intellectual and moral sublimity and later spread guidance all over the world.

Second: listening to the lectures that were regularly given at masjids in all fields of knowledge. Even poetry would to be recited at mosques, and the Companions of the Prophet used to listen to Hassan ibn Thabit (may Allah be pleased with him) while reciting his poetry.

Moreover, it is well known that the four famous schools of thought started at masjids, and the great Imams used to give their students lectures about Jurisprudence (Fiqh) that contained everything related to man, from the cradle to the grave.

The masjid is the spiritual stronghold that produces fighters in the cause of Allah. Al-Azhar resisted the French occupation two centuries ago and the British colonial masters in the beginning of the 20th century. It embraced the Egyptian Copts who helped their Muslim brothers and participated in the resistance against the British occupation.

It is worth mentioning here that during the Crusades, a Muslim woman who was praying in a masjid listened to the Khutbah on Jihad, so she cut off her braids and went to the Imam asking him to use them as a bridle for his horse. Such a move aroused men’s enthusiasm and motivated them to fight. This spirit was the reason behind defeating the occupation forces.