Why Does Mohamed Salah Make Prostration After Scoring Goals? 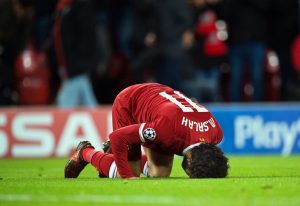 Mohamed Salah’s performance of sujud outside of prayer is a specific expression of gratitude for goals scored.

Mohamed Salah, the Egyptian King as known now among Liverpool’s fans in England, has become the most popular Muslim player in England, and surely the talk of the Premier League this season.

In 2017, he was named the BBC’s African Footballer of the Year. He has become a phenomenal player and one of the most talked about in the world today.

A recent report by Football Against Racism in Europe (Fare) found that the success of Liverpool Muslim star Mohamed Salah has significantly decreased hate and race crimes in the English Premier League.

His action in prostrating (sujud) to Allah Almighty after scoring a goal reveals what Islam truly entails, putting Allah at the center of everything. His prostration not only called young men, women, and children everywhere to want to mimic him, bowing in humble prostration to a lord that they may or may not believe in yet, but it also elicited fascination, what is it about him, that grants him such skill and success? He answers this question on the pitch, God.

A question may arise here, what is meant by prostration or sujud as known in Islam?

This prostration is a sign of thankfulness and gratitude to Allah Almighty. It is made when receiving good, good news, or bounty. Abu Bakrah narrated, “When anything came to the Prophet (peace be upon him) which caused pleasure (or, by which he was made glad), he prostrated himself in gratitude to Allah.” (Authenticated by Al-Albani)

Prostration normally occurs twice in every rak`ah (unit) of prayer. A Muslim who performs prayer that is required five times daily, finds himself in prostration 34 times each day.

In Islamic thought, prostration is perceived of as the physically lowest, but spiritually the highest, position a person can take as an expression of humbling oneself to God. Mohamed Salah’s performance of sujud outside of prayer, then, is a specific expression of gratitude for goals scored.

Mohamed Salah and all Muslims believe in the One God who created the universe and has power over everything within it. He is unique and exalted above everything He creates, and His greatness cannot be compared to His creation.

What does Mohamed Salah say in Sujud?

The Muslim in general glorifies God during prostration, saying “Subhana Rabbiya Al-A`la” (Glory be to my Lord, the Most High) three times or at least one time.

The Excellence of Sujud

In another verse we read:

Do you not see that to Allah prostrates whoever is in the heavens and whoever is on the earth and the sun, the moon, the stars, the mountains, the trees, the moving creatures and many of the people? (Al-Hajj 22:18)

In another verse we read:

From the Sunnah of the Prophet (peace be upon him):

The Messenger of Allah (peace be upon him) said, “A slave becomes nearest to his Lord when he is in prostration. So increase supplications while prostrating.” (Muslim)

Thawban (may Allah be pleased with him) said: “I heard the Messenger of Allah (peace be upon him) saying, “Make frequent prostrations, for every prostration that you make before Allah will raise your position one degree and will remit one of your sins”. (Muslim)