How to Taste the Sweetness of Prayer 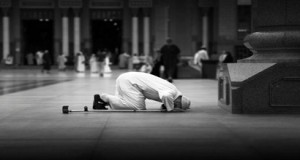 One only has to realize the importance of prayer, and unlock the secrets of khushu` to taste this unique sweetness.

It is a state of mind that contains serenity, tranquility, dignity and humility during prayer, which springs from one’s heart standing in front of Allah in humility and submission.

Sometimes in prayer we have so much devotion and can feel every word; yet at other times it’s all about the ritual movements and nothing more. In sha’Allah (God willing), I will try to summarize the main points of this show every week.

The Story of the Ansar and the Muhajirun

In the sunan of Abu Dawud, it is narrated with a good chain that in one of the battles, the Prophet (peace be upon him) appointed two guards, one from the Muhajirun (Immigrants to Madinah) and one from the Ansar (Muslims of Madinah). At one point, the Ansari got up to pray while the man from the Muhajirun reclined in order to have a nap. A man from the disbelievers who was close by saw this, and fired a small arrow at the Ansari who was praying. It hit him, but the Ansari, with some difficulty, removed the arrow and continued praying as the blood seeped from him. The disbeliever, upon seeing this, fired another arrow. The Ansari was able to remove it also and continued praying. However, the Ansari could not stand the pain of the third arrow and fell into ruku` (bowing) and sujud (prostration), and this is when the man of the Muhajirun woke up, seeing his friend seeping with blood. Upon seeing this, the disbeliever fled. “SubhanAllah! (Glory be to Allah!) Why didn’t you alert me when he first hit you?!” the Muhajir exclaimed. The reply of the Ansari was, “I was reciting a surah (chapter of the Qur’an) that I love, and I did not like to cut it off.”

Allahu Akbar (Allah is great!) Imagine this person’s state in the prayer.

The Sweetness of Prayer

The prayer is one of the most beautiful acts of worship. When one does his tasleem to end the prayer, there is a certain sense of serenity.

Ibn Al-Jawzi said about the prayer:

“We are in a garden, where our food is khushu` (devotion), and our drink is the tears that flow.”

For a person who has true devotion in his prayer, his soul is not even with him; as Ibn Taymiyah said, “His soul is actually circling the Throne of Allah.”

One could say that those were the people of old. No one feels this way anymore. But this isn’t true; one only has to realize the importance of prayer, and unlock the secrets of khushu` to taste this unique sweetness. Then the prayer becomes your refuge; the remover of your distress; something that you look forward to; and something that you wish would never end.

Let us begin to unlock these secrets and truly connect to our Lord when we pray.

The first step is that we have to change our understanding of khushu`. Having khushu` doesn’t just mean that you are concentrating and you are not distracted. Having a present heart is only the first level of khushu`. It is as though you have just entered through the door, and now you have the whole house to explore. There are depths and depths to khushu`.

Some may say that having a present heart is hard enough. Before coming to the prayer, we need to put it into perspective. Say we spend ten minutes in each prayer. That equals fifty minutes a day, so not even one hour. The rest of the twenty-three hours are for our dunya (this world). Can we give these fifty minutes solely for Allah, or do we have to turn them into dunya as well?

Think of this before you start your prayer, so that your nafs (self) doesn’t tell you that it is too hard to concentrate—because you can do it. Remember that the sweetness of being in front of Allah far supersedes the sweetness of whatever dunya distracts you.

There is a greater depth, and that is understanding. Truly understanding what you are reciting, and contemplating it. On the show, Mishary Al-Kharaz (Kuwaiti da`ia) stated: “Let me introduce you to one of your biggest competitors in the salah.” Do you know who he introduced?

One of the pillars in the masjid. Yes, the actual physical pillar. Any pillar, whether you are at home, work, or the masjid, is your competition. Why?

Because if you stand in prayer, it stands longer. When you are in your sujud, it is in sujud longer. You do your tasbeeh (glorifying and praising Allah), it does its tasbeeh for longer. How? Allah says in the Qur’an:

…And there is not a thing except that it exalts [Allah] by His praise, but you do not understand their [way of] exalting… (Al-Israa’   17:44)

We also read in another verse:

Do you not see that to Allah prostrates whoever is in the heavens and whoever is on the earth and the sun, the moon, the stars, the mountains, the trees, the moving creatures and many of the people? But upon many the punishment has been justified. (Al-Hajj 22:18)

Do not say, “But I can’t! “How can Allah ask you to have khushu` in prayer and then make it impossible for you? Even if Arabic isn’t your first language—did Allah not know that Islam would spread far and wide? ‘A`udhubillah (I seek refuge in Allah) from any such thought.

So remember that you can. Strive, and you will achieve it in sha’Allah (Allah willing). Remember that Allah is Generous, more Generous than we can even imagine. If you take one step towards Him, He is the One that comes to you at speed. Allah says:

And those who strive for Us— We will surely guide them to Our ways. (Al-`Ankabut 29:69)

So “bismillah” (in the name of Allah), and in sha’Allah let us pray that by the end of it, we all have much more khushu` than we used to.