From One State to Another 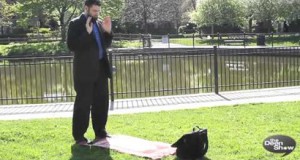 Takbirat Al-Ihram is one of the obligatory and first acts of the prayer; it is the declaration of Allahu Akbar at the beginning of the prayer.

Takbirat Al-Ihram is one of the obligatory and first acts of the prayer; it is the declaration of Allahu Akbar (God is greatest) at the beginning of the prayer.

Why Allahu Akbar? Why not al-hamdu lillah (all praise be to God), or la ilaha ila Allah (there is no deity but Allah)? Because Allahu Akbar means that Allah is bigger and greater and more important than whatever you are thinking of in terms of this life matters. “Allahu akbar” is in all the important declarations; when we pray, for the adhan (call to prayer), when we throw the pebbles during Hajj (Rami al-Jamarat), during `Eid Al-Adha and `Eid Al-Fitr. Allah says in the Qur’an at the end of the verse about Ramadan:

…to glorify Allah for that [to] which He has guided you; and perhaps you will be grateful. (Al-Baqarah 2:185)

When you say Allahu akbar, you are beginning your meeting with your Lord. You are saying, “God is greater” than your work worries, or the food you are planning on cooking or the outing you’re going on with your friends. God is greater than anything in your heart except Him. That is why, between every change of position, you say Allahu akbar – reminding you in case your mind starts to wander that that Allah is greater than any other matter on your mind . There is only one part where you do not say “Allahu akbar,” which is when you rise from ruku` (bowing).

When we say the initial takbir, we raise our hands. There are three reported ways that the Prophet (peace be upon him) did so:

Raising the hands before saying Allahu Akbar: you raise your hands up, bring them down in the position for prayer (right hand over the left on your chest), and then say Allahu Akbar.

Raising the hands after saying Allahu Akbar: you say Allahu Akbar, then raise your hands, then put them down in the position to start reciting.

All these are valid ways of raising the hands. And where should the hands be raised? Either level with the shoulders or with the ears – both are equally valid.

Mishary Al-Kharaz (caller to Islam), recommended alternating between these ways, so that our prayer doesn’t become mechanical, and so that we do everything with deliberation.  You are also ensuring that the different sunans (examples of the Prophet) are not left. The Prophet said:

“Whoever revives an aspect of my Sunnah [that is forgotten after my death], he will have a reward equivalent to that of the people who follow him, without it detracting in the least from their reward.” (Ibn Majah)

What does Allahu Akbar really mean?

Some people start their prayer by lying. Some say Allahu Akbar and they mean it; others lie because they say Allahu Akbar but in their hearts this life is greater. They do not feel the essence of the words that are being uttered.

‘Allah’ is our Lord’s unique name; no one is or can be called Allah, and it means the One who is worshiped and prostrated to. Others of His majestic names were used to describe people; for example, in Surat Hud it was said by the people to the Prophet Shuaib (peace be upon him):

But the two names that cannot be used to describe people are “Allah” and “Ar-Rahman” (The Most Merciful) – they are unique to Him.

“Akbar” is from takbir, which means to glorify. Allah says:

Allah is so great that we cannot fully comprehend all His attributes and greatness, yet we can understand a little of it by seeing His creation. From the mountains to the sea to the trees to animals to humans, all of this is proclaiming Allahu Akbar! How can we then not?

Yes, but why do we raise our hands?

You raise your hands in submission to Allah, throwing this life behind you. If you want to surrender to someone, you put your hands up saying, “I give up,” submitting to that person. Here, we are submitting willingly and with love, hope and awe, before our Creator.

When you raise your hands beginning with Allahu Akbar, your sins slowly start to rise to your head and shoulders. The Prophet (peace be upon him) said:

“When a slave stands and prays, all his sins are brought and placed on his head and shoulders. Every time he bows or prostrates, some of them fall from him.” (Al-Bayhaqi)

Amazing! What else happens when we begin the prayer? Allah faces you. The Prophet said:

“Allah faces the servant during prayer as long as he does not turn away.” (Abu Dawud)

So many things happen with the simple step of initiating the prayer with the takbir. A specific Satan whose sole job is to distract you from prayer comes. You cease to talk, you cease to fidget. Even your sight – you do not look up towards the sky. You are now in a sacred space, in intimate conversation with Allah. The Prophet said:

“The key to prayer is purification, its opening is to say Allahu akbar and its closing is to say as-salamu `alaykum.” (Abu Dawud)