The Etiquette of Urination in Islam 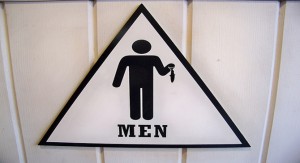 Purity has an environmental impact and is strongly connected to worship; without a clean body, a Muslim cannot pray.

It has become a common practice in many parts of the world for men to stand and urinate. The presence of urinals in almost every male bathroom has not only taught, but also encouraged people to stand up while relieving themselves. What does Islam say about this behavior?

First of all, we must remember that our ability to digest food and drink is a great blessing from Allah. We would not be able to survive without a digestive system. However, with every blessing comes a responsibility. Since human waste is classified as impure, Islam teaches us a few rules about how to relieve ourselves with dignity.

So what’s the problem?

There are many Islamic guidelines about how to use the restroom. We will only focus on those that pertain to standing and urinating. This common practice has led to the following unethical practices:

One bad habit that has resulted from using of public urinals is the loss of personal modesty in the restroom. It is very common to see two men using the bathroom while having a conversation at the same time. Had they peeked over just a little they would have be able to see one another’s private parts. This is abhorrent. The Prophet (peace be upon him) said:

“Allah detests it when two people relieve themselves uncovered and have a conversation.”(Abu Dawud and Ahmad)

The Prophet would take so much care to seclude himself that Al-Mughirah ibn Shu`bah (may Allah be pleased with him) said: “I was travelling with the Prophet. When he needed to relieve himself, he went far away from me.”(At-Tirmidhi)

How many urinals have you ever seen that provide wudu’ (ablution) facilities, water fixtures or even toilet paper? Probably none. This results in people leaving the restroom without an appropriate level of cleanliness or washing their hands.  The Prophet (peace be upon him) said: “When you go to the restroom, take three stones with you to clean yourself. That will suffice.” (Abu Dawud)

Salman Al-Farisi (may Allah be pleased with him), the Companion from Persia, was told, “Your Prophet has taught you everything, even how to use the bathroom.” He responded, “That is right. He (peace be upon him) told us not to…use our right hand when cleaning and to not use less than three stones to clean ourselves after we finish.”(At-Tirmidhi)

`A’ishah (may Allah be pleased with her), the Prophet’s wife, said to a group of women, “Tell your husbands to clean themselves with water because I am embarrassed to tell them. This is what the Prophet used to do regularly.”(At-Tirmidhi)

Cleaning yourself, with either a solid substance or with water, is so important in Islam that once when the Prophet (peace be upon him) passed by a man’s grave he told Ibn `Abbas (may Allah be pleased with him) that the deceased man is being tortured, but not for a major sin: “He didn’t used to clean himself after urinating.”(Al-Bukhari)

One of the common habits we find in people who regularly use urinals is that they also stand up while using a lavatory. This can result in an unsanitary seat covered with urine and germs. Very few people care to clean the seat, let alone the toilet area after leaving, so, the next person entering has to deal with that disgusting mess. In this regard, the Prophet said:

“Beware of the cursed ones.” Some people asked, “Who are the cursed ones?” He replied, “People who relieve themselves in public pathways or in shaded areas.” (Muslim)

Public pathways and shaded areas are two areas where people would be offended from excrement and filth because they use them so often. The same curse would apply to those who leave filth behind for the next person. The curse, in this context, has two meanings: people are cursed by the one who has to deal with the dirt they left behind and they are cursed by Allah for their careless and disgusting habits.

Are there any exceptions?

The Prophet (peace be upon him) always sat down to relieve himself. This is proven by ‘A’ishah, who was constantly in his presence. She said, “Don’t believe anyone that tells you the Prophet used to stand while urinating. He always used to sit down.” (Ibn Majah and Ahmad)

The only person who ever contradicted her statement was Hudhayfah (may Allah be pleased with him) when he said: “The Prophet [while traveling] approached a garbage dump and stood while urinating. Then, he called me to bring some water for him, so I did, and he performed wuḍu’. “(Al-Bukhari)

This is clearly an exception to the rule because the Prophet (peace be upon him) was in a very dirty place. Hudhayfah’s description of the place being a garbage dump reveals to us the context and makes it clear that ‘A’ishah’s challenge was referring to people who claimed the Prophet did it often as a habit. Her challenge still stands today. When someone tries to misquote the statement of Hudhayfah in order to prove that the Prophet used to stand and urinate just as people do today, we should correct it.

What should a Muslim do?

Muslims should try to combat this immorality in their own community by encouraging good standards of hygiene. We live in societies which claim to be clean and advanced, yet their toilets – the most basic of sanitary developments – are among the filthiest in the world. Visit any gas station, high school, theme park, etc. and experience what happens to the restrooms when there is no full time janitor to clean up afterwards.

People of the world still have much to learn from Islam’s frank information on cleanliness. Purity has an environmental impact and is strongly connected to worship; without a clean body, a Muslim cannot pray. It is such an important principle in Islam that the Prophet said:

“Cleanliness is half of faith.” (Muslim)

The messenger of Allah has taught us certain rules to observe which benefit both society and ourselves. It is up to us to be aware of this guidance, learn it and apply it.

2 thoughts on “The Etiquette of Urination in Islam”

ASSALAMUALAYKUM, my question is taht sometimes at work the toilets are not clean or even if it is i still have doubts therefore i stand up to urinate would that be okay?
also sometimes i doubts on weather i have any urinate drops on me although i try my best/hardest to not get any drops on me, and i try stay clean at all times. i feel as if saytan is always trying to make me think that i’m not clean and making me worry and time consuming.

thank you very much.

Thank you for your confidence in our website, and we seek Allah’s guidance to help us meet your expectations, and to bless you with strength and guidance. We also appreciate your eagerness to learn that which you do not know.
Dear Muslim brother,
first of all, you should make your effort to urinate while sitting down. `A’ishah narrated that, “Whoever tells you that the Messenger of Allah (peace be upon him) urinated standing up, do not believe him, for he would not urinate except while squatting.” (An-Nasa’i)
However, there is another narration that indicate that the Prophet (peace be upon him) urinated while standing which proves its permissibility. Hudhaifah narrated that the Prophet (peace be upon him) went to the dumps of some people and passed urine while standing. He then asked for water and so I brought it to him and he performed ablution.(Al-Bukhari)
So it is allowed to urinate standing up on the condition that there is no risk of drops of urine splashing onto one’s body or clothes, and that one does not expose one’s private parts.
If you are faced with this whispers from the Satan, then fight it and resist it. Know that it can never harm you when you fulfill the duty of fighting and resisting it, and you refuse to be controlled by it. The Prophet (peace and blessings of Allah be upon him) said, “Allah will forgive my ummah (followers) for any insinuating whispers that may cross their minds, so long as they do not act upon it or speak of it.” (Agreed upon)
May Allah guide us to His straight path.