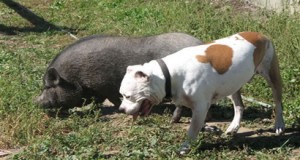 Najasah refers to impure substances that the Muslim has to avoid and wash off them.

Najasah refers to impure substances that the Muslim must avoid and wash off, if they contaminate his clothes, body and so on. Allah says in the Qur’an:

Allah loves those who repent and who purify themselves.(Al-Baqarah 2:222)

Allah’s Messenger (peace be upon him) said: “Purity is half of the faith.”

They are the animals that pass away as a result of “natural causes,” that is, without being slaughtered in the proper Islamic way. It is included in this category anything that is cut off of a live animal.

Abu Waqid Al-Laithy reported that the Prophet (peace be upon him) said: “What is cut off of a live animal is considered dead, i.e., it is considered like an animal that has not been properly slaughtered.”” (Abu Dawud)

We have already mentioned the Prophet’s statement concerning the ocean, “Its water is pure and its ‘dead animals’ are allowable.”

3. Dead Animals That Have No Flowing Blood

This category includes  bees, ants and the like. They are considered pure. If they fall into some substance and die, the substance will not become impure. Ibn Al-Mundhir said: “There is no disagreement on the purity of such water as far as I know, except for what has been related from Ash-Shafi`i. It is well-known that he considered them as impure.

Bones, horns, claws, fur, feathers, and skin and so on of dead animals are considered pure. With regard to the bones of dead animals, Az-Zuhri said: “I have met some scholars of the preceding generations who used such objects for combs and pots for oil, and they did not see anything wrong in that.” (Al-Bukhari)

This includes blood that pours forth from an animal’s body, such as blood from a slaughtered animal, or from menstruation, except for small amounts that are overlooked. Ibn Juraij said about the Qur’anic verse:

It refers to the blood that flows out. The blood that does not flow out, but remains in the veins, is permissible. (Ibn Al-Mundhir)

According to the verse quoted earlier, items mentioned therein are impure. The pronoun ‘they’ refers to all three of the mentioned items. It is, however, allowed to knit with the hair of a pig according to most of the scholars.

7. Vomit, Urine and Excrement of Humans

This is based on the hadith of Umm Qais (may Allah be pleased with him). She came to the Messenger of Allah with her unweaned son. After a while, the baby urinated in the Prophet’s lap. The Prophet called for some water and  sprinkled it over his clothes and did not wash them. (Al-Bukhari and Muslim)

Sprinkling is sufficient as long as the young boy is still not weaned. If he eats solid food, his urine must be washed from if it touches the clothes or body. There is no disagreement on this latter point.

Wadi is a thick white secretion discharged sometimes after urination. It is considered impure. `A’ishah (may Allah be pleased with him) said: “wadi comes out after urination. The person has to wash the private parts and perform ablution. It is not necessary to perform ghusl (ritual bath) from it.” (Ibn Al-Mundhir)

It is a white sticky fluid that is discharged from the sexual organs because of sexual excitement or foreplay. The person may not notice when it is secreted exactly. However, it comes from both males and females. Scholars are agreed that it is impure. If it gets on the body, it is obligatory to wash it off.

If it gets on the clothes, it suffices to sprinkle the area with water, as it is very hard to be completely protected from this impurity, especially for the young, single person. ‘Ali said, “I used to excrete mazi, so I asked a man to ask the Prophet (peace be upon him)about it. I was so shy to do so because of my position with respect to his daughter (‘Ali was the Prophet’s son-in-law). The Prophet said, ‘Make ablution and wash your penis.” (Al-Bukhari)

`A’ishah (may Allah be pleased with her) said: “I used to scratch the sperm off the Prophet’s clothes if it was dry, and wash it off if it was still wet.” (Ad-Daraqutni)

11. The Urine and Stool of Edible Animals

Both of these are considered impure. Ibn Mas`ud related that the Messenger of Allah went to answer the call of nature. He asked `Abdullah ibn Mas`ud to bring three stones. `Abdullah said, “I could not find three stones, so I found two stones and animal dung and brought them to him. He took the two stones and threw away the dung saying, ‘It is impure.”‘ (Al-Bukhari)

Al-Waleed ibn Muslim says: “I said to Al-Awza`i, ‘What about the urine of inedible animals, like the mule, donkey and horse?’ He said that people used to come into contact with these animals during fighting. They would not wash it off their bodies or clothes. As for the urine and stools of edible animals , Malik, Ahmad and a group of the Shaifi`iah viewed that it is pure.