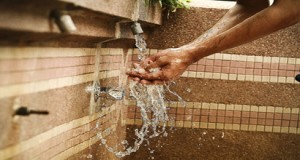 The impure substance alters the taste, color or odor of the water. In this case, it cannot be used for purification.

In the first part we covered three kinds of water. Here we learn more about the fourth kind and other related issues.

We can divide this category into two sub-categories:

A. The impure substance alters the taste, color or odor of the water. In this case, it cannot be used for purification. There is a consensus on this point.

B. The liquid is still considered water, meaning that the impure substance has not altered its taste, color or odor. Such water is considered pure and may be used for purification. This is based upon the following hadith:

Abu Hurairah (may Allah be pleased with him) reported that a Bedouin urinated in the mosque. The people stood to get him (and stop him). The Prophet (peace be upon him) said, “Leave him and pour a bucket of water or a container of water over his urine. You have been raised to be easy on the people, not to be hard on them.” (Agreed upon)

Abu Sa`eed al-Khudri (may Allah be pleased with him) asked the Prophet, “Can we make ablution from the well of Buda`ah (i.e., a well in Madinah)?” The Prophet told him, “Water is pure and nothing makes it impure.” (Abu Dawud and Ahmad)

“Leftover water” is what remains in a pot after some has been drunk. There are five different types of leftover water.

A: Water leftover after people have drunk from the pot

According to the Shari`ah, such water is considered pure regardless of whether the one who drank from the pot was a Muslim, an unbeliever, a person in post-sex impurity or a menstruating woman.

Although Allah says in the Qur’an:

This is a reference not to their physical state, but to their false beliefs and creed. They may come into contact with dirt or impurities, but this does not mean that their possessions or bodies are impure. In fact, they used to mix with the Muslims. Their emissaries and delegations used to visit the Messenger of Allah and enter his mosque.

The Prophet (peace be upon him) did not order that the objects they touched be cleansed. As for menstruating women, `A’ishah (may Allah be pleased with him) said, “I used to drink (from a container) while I was menstruating. I would then pass it to the Messenger of Allah and he would drink from the same spot where I had put my lips.” (Muslim)

B: Water left in a container after an allowable animal has drunk from it

Such water is considered pure. Since the animal qualifies for consumption, its saliva is also pure. Abu Bakr ibn Al-Mundhir said: “The scholars are agreed that such water is permissible to drink or use for ablution.”

C: Water remaining in a pot after it has been drunk by a donkey, mule, and beasts of birds of prey

D: Water left in a pot after a cat has drunk from it

Such water is also considered pure. This is proven by the hadith of Kabshah bint Ka`b (may Allah be pleased with her) who, when she was under the care of Abu Qatadah (may Allah be pleased with him) entered the room to pour some water for him. A cat came, drank some of the water, and Qatadah proceeded to tilt the container so the cat could drink more. Kabshah said, “He noticed that I was watching him.” He asked, “Are you surprised, O niece?” I answered, “Yes.” He said, “The Messenger of Allah said: ‘It (the cat) is not impure. They intermingle with you.”‘

E: Water left in a pot after a pig or dog has drunk from it

Such water is considered impure and must be avoided. Abu Hurairah reported that the messenger of Allah said: “If a dog drinks from one of your containers, wash it seven times.” (Al-Bukhari and Muslim)