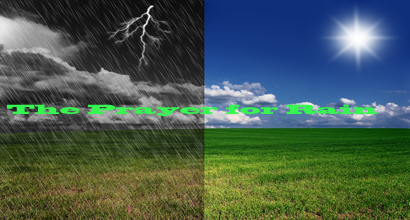 The prayer for rain is taken recourse to when seeking rain from Allah during times of drought.

This prayer is taken recourse to when seeking rain from Allah during times of drought. It may be performed in one of the following manners:

As soon as he finishes the khutbah, the people present should turn their outer garments around, each placing its left side on his right side and its right side on his left, face the qiblah (direction of the Ka`bah), supplicate to Allah and raise their hands while doing so.

Ibn `Abbas (may Allah be pleased with him) reported: “The Messenger of Allah (peace be upon him) went out [to make the Salat Al-Istisqa’] wearing old clothes, in a humble and lowly manner, and prayed two rak`ahs as he prayed the `Eid, but he did not give a similar khutbah.” (Agreed upon)

`A’ishah (may Allah be pleased with her) says: “The people complained to the Messenger of Allah (peace be upon him) about lack of rain, so he gave orders for a pulpit, and when it was set up for him, he appointed a day for the people to gather. He came out on that day when the sun had just appeared and sat down on the pulpit. He extolled Allah’s greatness and praised Him. Then he said: ‘You have complained of drought in your areas and of delay in receiving rain at the beginning of its season, but you have been ordered by Allah to supplicate Him and He has promised that He would answer your prayers.’ Then he said: ‘All praise is for Allah, the Compassionate, the Merciful, the King of the Day of Judgment. There is no God but Allah Who does what He wishes. O Allah, there is no God except You. You are the Self-sufficient and we are the poor. Send down rain upon us and make it a source of strength for us and satisfaction for us.’ He then raised his hands and kept raising them till the whiteness of his armpits could be seen.

After this, he turned his back to the people and inverted his cloak, keeping his hands raised. Finally, he faced the people, descended from the pulpit, and prayed two rak`ahs. At that time Allah produced a cloud, thunder, and lightning. And, by Allah’s permission, it rained and before he reached the mosque there was flooding. Then he saw how quickly the people were running for shelter, he laughed until his molar teeth could be seen. He said: ‘I bear witness that Allah has power over all things and I am Allah’s slave and Messenger.'” (Al-Hakim and Abu Dawud)

2- The supplication for rain can also be made on the occasion of Salat Al-Jumu`ah (Friday Prayer). In this case, the imam makes supplications during khutbat Al-jumu`ah with the people of the congregation saying (Ameen).

Shuraik narrated on the authority of Anas ibn Malik (may Allah be pleased with him) that a man entered the mosque on Friday while the Prophet (peace be upon him) was addressing the people. The man said: “O Messenger of Allah, our wealth has been destroyed and we have no transport to the market place. Supplicate for us for rain.” The Prophet raised his hands and said: “O Allah, give us rain. O Allah, give us rain. O Allah, give us rain.”Anas said: “By Allah, at that time there were no clouds in the sky and there was no house or building between us and the mountain. From behind the mountain came a cloud looking like a shield. By the time it reached the middle of the sky, it burst and started to rain. By Allah, we did not see the sun for one week. Then, on the next Friday, a man entered the mosque from that (same) door while the Prophet was making the address. The man faced the Prophet and said: ‘Our livestock is dead and the paths are unpassable. Ask Allah to make it stop.’ The Prophet raised his hands and said: ‘O Allah, around us and not upon us. O Allah, make it upon the hills, small mountains, bottom of the valleys, and plantations.’ The rain stopped and we walked out in the sunshine.” (Al-Bukhari and Muslim)

3- One may also make a supplication (for rain) without it being Friday and regardless of whether or not the prayer takes place inside or outside the mosque.

Some supplications for rain:

The following are some of the supplications that have been transmitted.

Ash-Shafi`i states that it has been related from Salim ibn `Abdullah, on the authority of his father that the Prophet (peace be upon him) would say for istisqa’: “O Allah, give us a saving rain, productive, plentiful, general, continuous. O Allah, give us rain and do not make us among the despondent. O Allah, (Your) slaves, land, animals, and (Your) creation all are suffering and seek protection. And we do not complain except to You. O Allah, let our crops grow, and let the udders be refilled. Give us from the blessings of the sky and grow for us from the blessings of the earth. O Allah, remove from us the hardship, starvation, and barrenness and remove the affliction from us as no one removes afflictions save Thee. O Allah, we seek Your forgiveness as You are the Forgiving, and send upon us plenteous rains.” Ash-Shafi`i said: “I prefer that the imam would supplicate with that (prayer).”

Sa`d reported that for istisqa’, the Prophet would supplicate: “O Allah, let us be covered with thick clouds that have abundant and beneficial rain, frequently making a light rain upon us and sprinkling upon us with lightning. O Allah, You are full of majesty, bounty and Honor.” (Abu `Awanah in his Sahih collection)

`Amr ibn Shuaib  relates from his father, on the authority of his grandfather (may Allah be pleased with them), that for istisqa’, the Prophet would say: “O Allah, provide water for Your slaves and Your cattle, display Your mercy and give life to Your dead lands.” (Abu Dawud)

It is also preferred, upon seeing the rain, to say: “O Allah, make it a beneficial rain” and he should uncover part of his body to the rain. On the other hand, if one fears that there is too much rain, one should say: “O Allah give us mercy and do not give us punishment, calamities, destruction or flooding. O Allah, make it upon the woods, farms and trees. Make it around us and not upon us.” All of this is authentic and confirmed from the Prophet (peace be upon him).

Is it possible to perform this prayer if one does not know the Surahs listed and recites another Surah instea?

Thank you for your confidence in our website, and we seek Allah’s guidance to help us meet your expectations, and to bless you with strength and guidance. We also appreciate your eagerness to learn that which you do not know.
Regarding your question, Almighty Allah says, “Allah does not charge a soul except [with that within] its capacity.” (Al-Baqarah 2:186)
The Prophet (peace be upon him) said, “The religion (of Islam) is easy, and whoever makes the religion a rigor, it will overpower him.” (Al-Bukhari)
It is a must to follow the footsteps of the Prophet (peace be upon him) in his guidance. There is not a specific hadith in reciting certain surahs while offering the “Prayer of Rain”. So, it is permissible to recite whatever you have memorized in prayer.
May Allah guide us to His straight path.

They said that when doing the prayer you wear the jacket inside out.

Dear Muslim brother, May Allah bless your bless your eagerness to follow the straight path.
Regarding your inquiry, yes it is preferred to wear your jacket inside out as it the Sunnah of the Prophet (peace be upon him). `Abdullah ibn Zayd narrated that the Prophet (peace be upon him) went towards the Musalla and invoked Allah for rain. He faced the Qiblah and wore his cloak inside out, and offered two rak`ahs. (Al-Bukhari)