Shortening the Prayer for Travelling in Ramadan 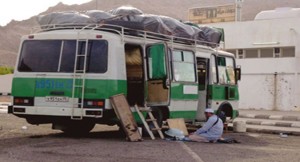 The Prophet said: “Allah has relieved a traveler from (the obligatory) fasting (in Ramadan) and half of the Prayers.”

It is well known that shortening the Prayer is a legal concession for a traveler, as Allah Almighty says:

And when ye go forth in the land, it is no sin for you to curtail (your) worship if ye fear that those who disbelieve may attack you. (An-Nisaa’ 4: 101)

Breaking the fast of Ramadan is another concession for the traveler. Allah Almighty says:

Moreover, it is reported that the Prophet (peace be upon him) said: “Allah has relieved the traveler from (the obligatory) fasting (in Ramadan) and half of the Prayers.” (Abu Dawud)

These concessions apply only if all the conditions that make a Muslim worthy of such concessions are applied, as agreed to by Muslim jurists.

Travel may be temporary or permanent. Permanent travel is one of two cases. The first case is that of a person who accompanies his family and all his needs in his travel [such as a nomad]. The second case is the one who doesn’t accompany his family, but his work requires him to constantly travel, such as the train engineers, pilots and sailors.

Al-Athram said: I heard Abu `Abdullah Ahmad ibn Hanbal being asked whether a sailor is allowed to shorten the Prayer and break the fast of Ramadan when he is on board the ship. He answered: “If the ship is his home, then he is to perform all the rak`ahs (units) of the Prayer without shortening, and fast in Ramadan.” He was asked: “How can the ship be his home?” He answered: “That is he has no other residence, and he and his family live on it.” `Ata’ also has the same opinion. (Al-Mughni by ibn Qudamah)

It is not permissible for a person who travels constantly to break the fast of Ramadan, for this means abandoning the obligatory fasting of Ramadan completely. However, the one who travels a lot alone, due to his job requirements, is permitted to shorten the Prayer and break the fast of Ramadan. This is because such a man necessarily spends some days at home. Hence, he can make up for the broken fast days of Ramadan. (Sharh Ash-Sharqawi `ala At-Tahrir)

The Hanafi scholars maintain that shortening the Prayer in this case is the original rule, and whoever performs prayers fully has no right to combine them.

Are Women Allowed to Lead Other Women in the Obligatory Prayer?